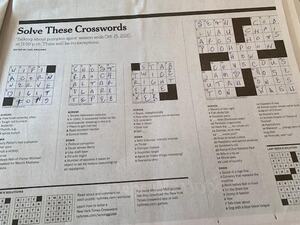 “I am sitting here drinking coffee and doing a crossword and life is good. The crossword is such a special thing. You should write an essay about it.” Thus started my Sunday morning: with a happy missive from my oldest son. His simple message set of a flood of gleeful chemicals in my brain. Life, indeed, is good, and the simple pleasure of having a kitchen in which to sit and drink coffee, and the luxury of health and time in which to do the puzzle is enough. And the puzzle is, indeed, as special thing. And, so here I am, writing about it.

I spend several minutes each day (more toward the end of the week) puzzled by the New York Times crossword puzzle, as I have roughly since I graduated from college. He is, relative to that, a neophyte, although he has not only matched but surpassed my speed on many days. I bathed in that thrill of victory and agony of defeat when your child overtakes you at a skill you helped to cultivate in them.

He certainly got me thinking. What exactly is it about the puzzle (and I’ve tried others, but nothing compares to the NYT, in my humble opinion) that makes me do it as religiously as I brush my teeth or write my daily haiku? Frankly, I am uncertain that I can fully capture the answer in words – ironic, since that is the essence of the puzzle – but there are subconscious emotions involved that defy definition. He tried valiantly as we walked the shore together at Compo one day... “words are like a virus; the puzzle is the antidote.” I am paraphrasing and doing it badly. I hope he writes his own essay about it one day and told him so. Here is my best effort at explaining the olio of ingredients that makes this daily practice so essential and satisfying:

Order – right now especially, life can feel chaotic, uncertain, or out of my control. The 15x15 square black and white grid (and now most recently the smaller, 5x5, mini) appear solid, structured, and reliably every day. The ritual of filling in those white squares brings a soothing structure and predictability, even if it’s only for five minutes or so on Monday and 30 on Saturday (the puzzles grow more difficult as the week goes on. Monday is easy. Saturday is hard. Sunday is a Thursday-level puzzle). They are a consistent, constant anchor in a very uncertain world.

Promise – those same squares arrive blank every day. They hold promise. The puzzle itself is as uncertain as some days feel when I first look at it. But I know even before I begin that those blank spaces will be filled in with something that makes sense in the end.

Challenge – I always feel better when engaged in some activity that makes me push myself. I like graduate degrees. I got a black belt as a young mother of two boys. I feel my brain begin to atrophy in the absence of a thrown gauntlet. These puzzles may not require herculean effort, but they keep my brain on its toes. A very interesting phenomenon occurs with especially difficult puzzles. I walk away from them for a while, sometimes even overnight. When I return, I know the answers that stumped me immediately, without having consciously concentrated on them. My brain works behind the scenes to continue solving the puzzle without me.

History – I’ve watched the world change over the years through these puzzles. When I began doing them, Eugene T. Maleska edited them. His rules were, in some ways less flexible than Will Shortz’s, but in other ways made the puzzles easier. Maleska had many fewer current cultural and social references in his clues, but he also tipped his hand by telling us how many words the answer contained. Shortz keeps us guessing by keeping that to himself. Shortz’s editorial style makes the puzzles more accessible to a broader cohort – more inclusive, which is a wonderful thing. That doesn’t mean they’re easier, it just means a wider group of people gets to struggle each week. I used to pore over the puzzles on paper, pen in hand. The Sunday puzzle entertained me all weekend. Now, they appear online at 10 p.m. the night before the day they appear in print. I am poised, iPhone in hand, to begin at the stroke of 22:00, as it appears on my phone. The puzzles’ topics and style have reflected technological and cultural changes in our society over the decades.

Connection – I know that every day that I sit down with the puzzle, millions of people around the world are doing the same thing. That’s visibly more obvious when we gather in Westport every February for the annual crossword contest. Who knows whether we will be able to convene this year? It’s somehow comforting, especially now, to know that I share this obsession with so many. But of late, this has become intensely personal. Until about six months ago when he developed a relationship with a young woman who did puzzles, my oldest was only tangentially interested in the practice. This surprised me, because words form his world, and he works magic with them as few others I know do. But when she sparked his interest, she opened the barn door, and the stallion never looked back. Initially, he felt extreme frustration at his less than stellar performance. “I’ll never figured it out,” he lamented. I consoled and coached him. And to no one’s surprise, he’s now surpassed my time on both the mini and the maxi on most days. The beauty of the online version is that it records your time. I have this delicious link to my son now: we report our scores to each other daily. “27,” (seconds) I texted him last night after I finished the mini. “22,” he replied. Of course. He walloped me on the maxi. There are still days when most of the clues refer to days before he was born, and I have an edge. Sometimes I just get the theme more quickly. Sometimes I just remind him that I am simply smarter than he (although we both know that’s not true). But the joy that this bond brings far outweighs my dismay over his dominance.

Words – this is it, really, isn’t it? When that pesky Polonius asks Hamlet what he’s reading, the Danish prince replies, “Words, words, words.” (II.2.181) That’s all there is. That’s what it all boils down to. Language, and its many variations and the creative, gymnastic way in which we can weave or twist them to our will, as did Will. I humbly claim them as the tools of my craft and delight in the way the myriad puzzle creators and their wrangler, another WS (Will Shortz), arrange and rearrange them, play with them, and bring a different order to them every single day. Indeed, as my son said, these puzzles’ configurations are an antidote to the pain and chaos words can cause in the wrong hands.

I will do the puzzle for as long as I can. I will send my times to my son for as long as I can, hoping against hope that my brain can untangle the clues and direct my fingers more quickly than his on occasion. I will revel in the seeming endless themes and combinations that the creative team at the NYT comes up with to support our habit. Friends often say to me, “I can’t do the puzzles. They’re too hard.” Just like the yoga-curious tell me “I can’t do yoga; I’m not flexible.” I gently and encouragingly say, “nonsense.” Yes, you can. And I hope you will, and I hope they bring you the same joyful satisfaction they bring me.