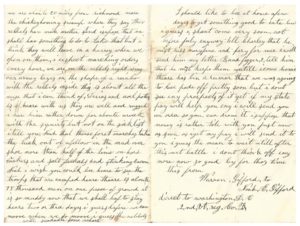 Ellen Wilhelms Rolands and I went to high school in Westfield, NJ, way back when she was a Wilhelms and I a Meyer. She valiantly and tirelessly spearheads the efforts to keep our class in touch and organizes our reunions. I’ve known and appreciated her for that since we graduated, but now she’s become “known” for another reason. I’ll let her tell you, and then share the discussion we had recently:

"The Yankee Civil War Letters are back!

Recently I had the pleasure of getting our family "Civil War letters" after my mother's death. They were handed down through the generations and landed with me. I have completed scanning and transcribing the letters written from war by our ancestor, Warren Gifford. Since we have many cousins, my sister and I wanted to scan and share them with our family, friends, and those interested in history.

Warren, his brother Noah, and sister-in-law, Emily were raised on a farm near the western border of Vermont near New York State. He served for the entirety of the war, and his family saved many of his letters. At this time, Warren was a single man and served with the Vermont Volunteers. He was wounded and taken prisoner in Richmond during the First Battle of Bull Run/Manassas (see previous post).

I think you'll find his words honest, heartwarming and sometimes difficult to read, as you may expect for such a tragic time in our history. The letters have been transcribed to make reading easier. The original script and text are charming but sometimes a little challenging because of spelling and punctuation. I left much of the language the same, but took some liberties to make a few minor changes to enhance readability. Any question marks indicate words that I could not decipher.

This first letter from Warren outlines the Siege/Battle of Yorktown, during which Union troops forced the Confederates out towards Williamsburg.

Please enjoy Warren's first letter dated May 17, 1862, a few months after he was released as a POW." (Pictured at top left; click to enlarge.)

Ellen has known about these letters since she was a child. She recalls her mother looking through them and inviting her to do the same with caution, telling her how old they were. Her mother hailed from Vermont, as does her forebear Warren Gifford. Her maternal great grandmother told the family of their relation to Abe Lincoln, and once technology caught up to be able to verify or disprove the claim, the family investigated. They found that indeed not only are they distant kin to Lincoln but to John Adams as well. It seems only appropriate, then, for Ellen to use the technology unavailable to her mother, to share her relative’s words with the world. She has scanned the letters, beautifully written in the lost art of cursive, and painstakingly transcribed them. She has spent well over 50 hours on this massive project so far and has much work left to do. Ultimately, she’d like to get them into the hands of a museum or academic institution that could catalogue and preserve them. No doubt they’d illuminate and expand the current body of knowledge about life during the Civil War and about specific battles in which Gifford participated.

He served for the entire war, spending seven months of it as a prisoner of war. Gifford watched a close friend die of gunshot wounds to the head, back, and leg. After retreating in the battle, he went back to his friend to retrieve his personal effects; someone had already ransacked his uniform and pilfered everything, including a medal he’d earned. Fortunately, later in the war, someone kindly returned that medal to his friend’s family. He cleverly accessed a furlough claiming that his mother ailed with consumption and later lamented his white lie, hoping that “the sins that are mine be absolved.” I believe the universe will forgive him.

For now, Ellen has set up a Facebook page, open to the public, for any Civil War history buffs to access these treasures. Just go to “The Yankee Civil War Letters” and ask to join. She will welcome you to step back in time with her family.