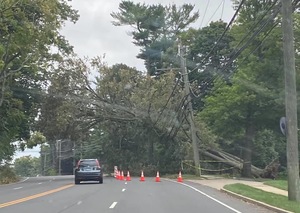 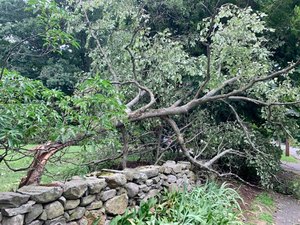 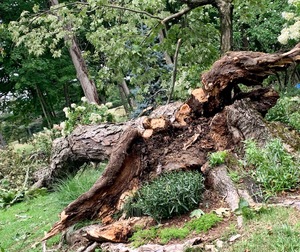 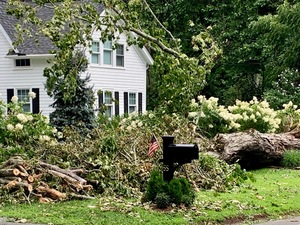 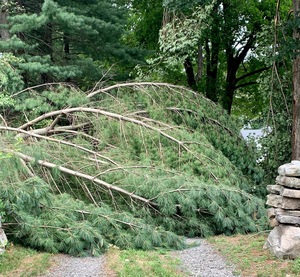 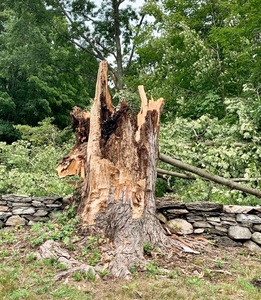 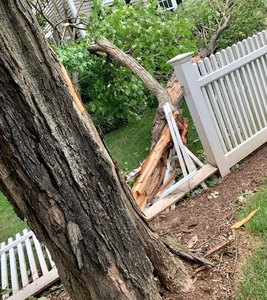 I stood at the sliding glass door to my deck, watching the wind whip the beech tree branches back and forth such that they seemed to wave at me. They came so close at times that they nearly touched the glass and went so far at others that they seemed to be in some kind of arboreal back bend. At the time, a tornado, the first in Connecticut if press about the incident proves accurate, 25x50 yards in area, touched down about a mile from where I blithely stood gazing at amazing nature. It tore a roof off one home. “Stay safe,” came a text from one son, four miles away at my ex’s. “We’re in the basement,” said the other. What??? For a little wind and rain, I thought? And then I checked my phone. “Tornado warning. Take cover,” said the text, the email, and the emergency phone call I listened to in voicemail. Instead, I’d been waiting to take cover of shattering glass apparently. Neither Dorothy nor I followed tornado etiquette. Fortunately, I just ended up on my couch and not in Oz. My home held its ground and landed on no wicked witches as it pitched back earthward.

I settled smugly into that sofa, assuming that the power that had gone off would return in a few hours at the most. The winds had died down, and my son had ventured out to see if he could rescue me, but a tree down across power lines prevented him before he even drove the length of a football field. I woke the next morning, after having gone to bed at 9 p.m. - because despite all those fables about Abe Lincoln reading by candlelight in his log cabin, I learned it’s actually pretty difficult to do – having slept well. I must have dreamed of cool air blowing from the vents, because I was convinced that the power had returned and pumped it out. But alas cold (or hot) hard reality hit. Nothing was illuminated, and I had no phone signal (I’d had LTE the night before). I dressed for the gym, because what else does a girl do in a crisis, and walked the ten minutes or so to it, only to find it and all of Saugatuck powerless. And then I began to feel powerless. No signal, low battery, and no information. I literally wandered the streets to see if I could raise a bar or two, and finally somewhere in the intersection of Riverside and Bridge (sorry, cars who had to avoid hitting me), I called my son. I must admit that I felt a small sense of panic, not knowing the extent of what was going on around me or how long it might last. “Please can you come get me if it’s safe? I have no signal and no way to contact you again once I go back to my place.” Despite my having woken him up, he said, “sure. Give me 20 minutes. If I can’t get through, I’ll let you know.” But how would he do that? I just went home, packed one change of clothes, and waited.

I sit here writing after a few days, Eversource (which I now call Neversource) rebuking my naivete with dark. Not on my sofa, but at the white marble kitchen counter of my former husband and his family, where my two boys stay, and where a generator cools the house, charges multiple devices, and keeps food from spoiling. I spent two hours of my first morning here clearing the front and back yard of branches with my son and my ex because I needed something to do – some way to expend the internal energy generated by the lack of external energy. I returned to my home to retrieve clothes and a toothbrush, water my tomatoes, and throw out every last item in my refrigerator and freezer. On day two of the tornado lockdown, my oldest dropped me at my place to get mail and another change of clothing. I hadn’t planned on overstaying my welcome in this way, but Neversource had other plans for me. Rather than keeping him stuck in my hot place while I wandered up and down stairs listening to my dying home alarm battery beep pathetically on its last legs, I suggested he go back to his dad’s. I’d walk there. For exercise. For something to do. For catharsis.

What I saw on my odyssey both comforted and concerned me, deeply. The very brief good news: people were out, in cars, on bikes, and on foot. Landscaping company chainsaws buzzed; leaf blowers blew. But majestic downed trees and their lesser limbs – many the size of mature trees themselves – often barred my way. They lay akimbo, torn at their bases, split in half, completely uprooted, lying tenuously on power lines, on roofs, on lawns, on cars. The wires sagged as they held their fallen victims, cradled in their thin, black arms, poised at a moment’s breeze, to let them go and fall to the ground. In some cases, they already had, and I circumnavigated live wires in the street and on sidewalks more than once, coiled and ready to shock me at one misstep. And shock me they did, figuratively, if not literally. The carnage rivaled anything I’d seen after Sandy or other hurricanes in Florida and Virginia that I’d witnessed firsthand. Two days in, though, and what I didn’t see was a single Neversource truck, car, van, cherry picker. Anywhere.

My ex’s car has WiFi, so he and his wife, who both work full time, have taken turns sitting inside it so they can make calls and join Zoom meetings. My son and I sit on camp chairs on the driveway near the car, sucking its precious signal so we can work and find updates on the carnage. The immense tree that hangs over Post Road West still hangs over Post Road West as of this writing, four days in, sagging ever closer to the road, taking those precious power lines down with it. This odd driveway configuration is our new home office. And we thought Coronavirus had made life different.

Look. We are lucky. Even if I hadn’t had the luxury of staying at a fully powered home, I would have been frustrated and hot, but fine. I can replace the food from my fridge and my security system battery without suffering a severe financial setback. Some friends have fled town to stay with family and acquaintances who Isaias spared. The lights (not mine) are coming back, slowly, oh so slowly. But not everyone is as fortunate. Elderly sit alone in hot homes with little or no way to reach loved ones. Not everyone in this tony town has the resources to replace lost groceries with the wave of a wand. And we are all suffering from Covid fatigue – literally or figuratively – and didn’t need this icing on an already molded, rotting cupcake. No, it is not nearly as bad as Katrina. People are not standing on rooftops crying out for rescue. Stadia are not full to the brim with desperate humanity. But according to what I’ve read, Isaias hit Westport harder than any town in Connecticut, delivered its first tornado, and ranked as its fourth worst storm. At a time when uncertainty and discomfort already reigned.

No doubt the authorities will hash this out for months to come, but from where I sit (comfortably at the minute), I cannot comprehend how a utility company that knew of the approach and severity of the storm, and makes it its business to deal with crises (and charges us dearly to do so) seems to completely have fallen apart. No updates, no apparent progress, nothing. I’m sad, and I’m frustrated, and I’m antsy. And I consider myself very lucky, even in the Shady Aftermath of Isaias.