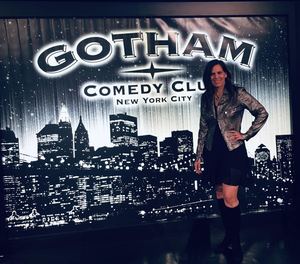 I love to entertain. Cast in multiple plays during my youth, I’ve relished roles from The Sound of Music’s Brigitta to My Fair Lady’s Eliza to Abigail Adams in 1776. Early on, my penchant for acting, for storytelling, for performing was woven into the very fabric of my being. Nothing makes me happier than holding court — whether in childhood productions or while embellishing tales of my early days, college years, or motherhood’s trenches. I thrive on stage time. To my children’s chagrin, I was voted “coolest” and “funniest” at the same high school they attended. Though dubbed so as a scrunchie-wearing, florescent-loving 80s adolescent, those teenage honors have stayed with me. I’m a sucker for leather jackets and favor a mostly black wardrobe (“coolest” box, check), plus my natural schtick has been known to elicit laughter (ditto, “funniest” box). Those teen titles paved a destiny of sorts, as I’ve delved headfirst into stand up comedy.

A super fan of all things humorous, I’ve dragged (operative word) my husband and other willing pals to dive bars, indie clubs, and church basements to catch a new comic or improv troupe, even if I was their cult following of one (a la the sole fan, Mel, in HBO’s former Flight of the Conchords). A writer by trade, I have a soft spot for creatives — those who live out loud — bravely and vulnerably pursuing their craft with fingers crossed for applause, acceptance, approval. I attend art exhibits, theater debuts, memoir readings and the like in support of my fellow comrades. I am dream champion. Having published (and initially, shyly shared) many personal essays, I get it. We put ourselves out there; it’s our job. Stand up is an offshoot of my first love, writing, and a welcomed new hobby. Call it my midlife crisis.

I was blessed with two funny parents. My late father was a quick-witted lawyer, whose people-person gene I seem to have inherited. My mother is a retired speech and drama teacher with a dryer sense of humor. A combination of my roots, I’ve cultivated a brand of comedy I call “clever clean.” I’m also half Colombian and half Italian — your basic Latin party pack. Exaggerated expressions and hand gestures are my Hallmark, also evident in my stand up; they’re part of my rhythm. For me, staying true to your story is key, and comedic timing is king. Think Sebastian Maniscalco.

I view the world with a watchful eye and appreciation for the quirky, so as to fashion amusing takeaways. I also adore words; I’m an English major’s English major. So much so, I’ve pulled over in heavy traffic to type the perfect title into my phone, and sleep with Post-it Notes bedside to capture spot on punchlines sparked by 3 a.m. epiphanies. Immersed in comedy classes, my mind now works differently. Everything has potential: the most mundane can morph into hilarity. Grocery store conversations are undeniable keepers, transactions at CVS can be mined for gold, and family interactions, fodder for Netflix specials. My accidental eavesdropping provides dense content I distill for relatable humor. For three years, I’ve heightened my listening skills and honed this playful writing muscle to draft observational humor. The stand up stage now feels like home and laughter, my oxygen. According to my teacher, Christine, “there’s nothing better than getting paid in laughs.” Several shows in, I consider myself rich.

Day one in comedy class, I sat among seasoned students in a semicircle, support group-style. We heard about the elements of good comedy and how stand up would be our superpower. That we would be born on stage as comics in a mere eight weeks. How we’d write a five-minute stand up “set” that would be ours forever. That we’d live off our graduation show high for a week. A scenario that seemed all too charmed, but I attest it’s true.

We were also told five minutes is the first time increment comics are given, and some clubs mute your microphone should you bleed over. I silently envisioned a Gong Show hook removing a reluctant me at five minutes, one second. This seemingly short stint is five minutes in dog years in front of a packed crowd you pray responds with belly laughs. Comics sometimes overlap topics, but Christine claims “there’s enough for everyone” — an adage that played out when a classmate and I both riffed on kale; our takes were unique, and the laughs, plentiful.

Most important, I learned the comedy code: don’t share your material with anyone, especially your family. Take note: they’re wily and will try to uncover your work with Olympic fervor to comment, tweak, or approve your material —an exercise in masking their worry or a hidden wish to be mentioned. Their pursuit mimics an interrogation scene from Law and Order, as if you’re fidgeting in a smoke-filled, dimly lit room without a lawyer, given only a yellow legal pad on which to write a statement, or confession. Stand ups agree: you cannot cave.

Each class we bring a few minutes of material — if only half-baked jokes — to read and record. I am a rule follower and always tote rough drafts, peppered with wannabe bits, to be juried by my peers. My out-of-the-gate work was patchy at best, the home design equivalent of “early off campus,” but the tribe was supportive. My Connecticut class doubled as a weekly B-12 shot; I consistently came away more energized than I’d arrived. I learned to highlight funny phrases, finesse the best lines, and fine tune my delivery: the makings of a triple threat. After my read-through that first night, I returned to my seat secretly triumphant, having launched my comedic moonlighting. The class’s response was buoyant; picture four arms interlocked at wrists, lifting me up. I’d found my people.

A publicist by day, I promote others for a living; it’s a tad more challenging to plug yourself. But I dug deep and successfully coaxed 32 fans to my first gig; I’m of the “go big or go home” ilk. My comedy debut was akin to having my first child: I powered through with an expectant parent’s naïveté and can-do spirit. Though just before my turn, I was overcome with nerves, my face paler than its usual olive. Needing to regroup, I steadied myself in the dressing room armchair. The closing comic, Laura, noticed and encouraged me: “You own them,” she said, referring to my first-time audience...advice I repeated when dropping off my second son at college. Her words were a timely salve for my jittery soul; I quickly rebounded and gave life to my first stand up set. I exited stage right, my arms in a game-winning field goal sign. And like childbirth, I’ve since forgotten the labor pains and instead hold fast to that rock star moment.

I recently headed for the New York City stage with empty nest, bucket list bravado. Having enrolled in a comedy class, I commuted for two snowy months, typing jokes into my iPad on Metro North. Once more, I met peers who found the funny, as we showcased our senses of humor each week. The class was a mixed bag of Millenials and open mic graduates; a lively bunch with serious stand up chops. We shared laughs and took notes, led by a comedy vet with club credentials 20 years strong. When our show arrived on a balmy Sunday in February, I was Rocky Balboa-ready, minus the raw egg smoothie. Too wired to eat, I primped and prepped for my soon-to-be videotaped set, evidence of the evening to be YouTubed into history. Sporting a pewter Moto jacket over a little black dress, beach waved locks, and black suede boots, I Ubered to Gotham Comedy Club in New York’s Chelsea neighborhood. I’d visited that venue for a decade to cheer on my heroes up close, in hopes their magic would rub off. It was there I’d caught the comedy bug. Arriving early, I asked a server to take my picture with the logo backdrop behind me — proof for social media and my away-at-college, Generation Z sons. I snuck in a quick mic check (at 5’ 2”, I often need to adjust the height), then was ushered and seated far left with the keyed up talent. I paced and pregamed in a glassed-in hallway that exuded a Super Bowl locker room vibe, methodically mouthing my jokes. My charge: to grace the stage sans notes and perform for a sea of neutral New Yorkers.

I refrained from socializing pre-show so as not to mess with my mojo. Nearly a dozen Aline fans were in attendance, not too shabby for a winter school night requiring a trip to The Big Apple. There was a surreal feel in the air, a temperature of tense anticipation. In my corner were three college representatives: a bestie, a bridesmaid, and a makeshift brother. Others included my high school pal (and co-captain of cheerleading) flanked by her husband, a “mommy friend” from Long Island, her NYC-based sister with a Plus One, two twentysomethings I’d met a few weeks prior, and my husband, who remains unscathed in my act.

I was eighth in the lineup, the sought after center and lucky sweet spot. The crowd would be warmed — I had no pressure to open or close — my idea of a win-win. As I listened for my oft mispronounced name to be called, my nearby college buds provided much-needed fist bumps on the anxious sprint to the stage. I heeded my cue as the camera rolled, much like the jokes off my tongue. It was go time. The stage was small and the patrons up close; we were having a conversation — more job interview, less elementary school Christmas Pageant. Per the clip, I exuded a relaxed confidence and remembered my lines. I sailed through my set, hitting all my marks (I missed one word, though no one was the wiser). My last joke landed, and I left the stage, my step a little lighter, adding Gotham to my resume. I’d tackled my Mount Everest. Awash in relief and pride, I took a seat and sip of water, poised to root for the next comic. Equipped with a funny bone, gumption, and a pipe dream, I'd mastered Manhattan.

Comedy has long been hailed nature’s best medicine, the very prescription for better health. Even the Mayo Clinic agrees. Part of the stand up scene, I have a newfound appreciation for the power of humor and its reciprocal benefits. Comedy heals: it's connection, community, a cure-all. On the rare down day, I’ll give my past shows a gander and am gifted a sure-fire endorphin boost. Stand up is my chocolate. Simply put, laughter begets smiles, which are a good kind of contagious.

Mark Twain is quoted as saying, “Comedy keeps the heart sweet.” Robin Williams said, “Comedy is acting out optimism.” Tiffany Haddish said she considers herself, “the Administrator of Joy.” That’s a whole lot of positive. The historical meaning of my name is “to shine.” I love that. Someone once told me I “sparkle,” so I’ve appointed my comedy self the incognito name, “Ambassador of Light.” It’s not a badass Justice League moniker, but perhaps, one that’s gentler, with personal purpose.

It turns out stand up is my superpower, one I use for good: to illuminate, to inspire, to ignite laughter — bringing forth a literal lightening up. My drama teacher mother has always said, “It’s no fun without an audience,” while my Type A father forever reminded, “it’s never too late Leeny.” It’s no surprise, then, my love affair with comedy has not only blossomed, but most fortunately, come full circle.