My Life on the Post Road: Shakespeare in the House 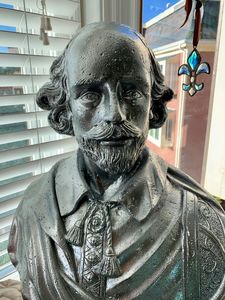 Every Thursday evening during the 2018 term at the Shakespeare Institute, we would gather in Marie Corelli’s former lounge at Mason Croft at 19:00 (they use military time to avoid am/pm confusion) to read a play aloud. NOT one of Shakespeare’s.

Instead, we read from the vast canon of lesser known (at least by the vast majority of folks outside of the Shakespeareverse) early modern English plays. Marlow, Lyly, Jonson, Barnes, et al. And in the summertime, after term had ended and we were otherwise engaged in slaving over our theses, we could participate in a fortnight-long marathon play reading. It would highlight one playwright (Messinger, when I was there) during each weekday for several weeks. We’d then sit in one of the more modern classrooms, windows open overlooking Church Street, where wandering tourists would often stop and wonder at our archaic exclamations. My oldest, Dustin, even got to participate in one when he came to visit. The evening readings featured wine to enhance the camaraderie and acting abilities. Daytime readings were dry – in refreshments, not tenor. Teetotalers only. One of my favorite and most erudite professors, the inimitable Martin Wiggins, author of the tomes we fondly called the Wiggalogue, hosted these events with glee, with infinite knowledge, and with a warmth that welcomed and educated veterans and neophytes alike. We took turn casting the roles during term – no mean feat, needing often to figure out a tangled helix of double and triple casting. Martin would cast the marathon readings.

When I visited Martin on my trip back to England last summer, happy to once again be sitting in his cluttered turret office, he told me that this summer they’d break with tradition and read the entire Shakespeare canon (in part because of research he’s doing for a new book). He knew very well how bereft I’d be at having to miss this special marathon.

But the coronavirus works in funny ways, and like every other school, the Shakespeare Institute shuttered it doors to the plague, much like The Globe and other institutions would have in early modern times. And, like so many other activities (unlike those in early modern times), the marathon went online. So, thanks to a Zoom-like program called BigBlueButton (yup, I still hate it, but less so for this application) I find myself catapulted through space back to the heart of Stratford Upon Avon. It delights me to see my classmates and friends and meet new ones. It thrills me to hear Shakespeare’s words spoken eloquently and enthusiastically in the mouths of those who know them so well. It tickles me to participate in the readings in even the smallest of parts – I’ve read in Love’s Labours Lost, Merchant of Venice, Henry IV Part 1, and Much Ado About Nothing, and hope to do so in several more as we work our way through the works. The whole experience is a Bard’s dream come true.

His plays are long; I spend the better part of the morning in my office, a shrine to Shakespeare, as the readings take place at 14:30 in England, and often last more than three hours. I couldn’t think of any better way to spend a quarantined morning, though, than immersed in his words. COVID-19 has delivered so many unwanted consequences; this one shines brightly as a silver lining.