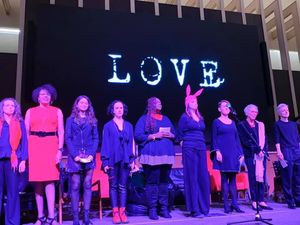 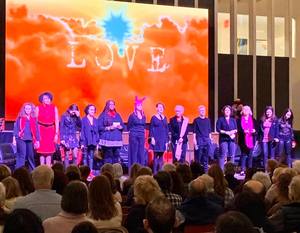 I had the privilege to stand on the stage at the Westport Library last week to read The Flood, one woman’s story of many portrayed in Eve Ensler’s The Vagina Monologues. Her play, which debuted in 1996, shared selected accounts from the over 200 women she interviewed worldwide. Two years later, she and others launched V-Day, allowing groups to perform the show in February, royalty-free, provided all proceeds go to organizations that work to prevent violence against women. We supported The Rowan Center and the Domestic Violence Crisis Center that evening.

This particular performance was the brainchild of Kerri Gawreluck, fellow yoga instructor, longtime friend, and relatively new member of the library’s event staff. I had seen, and been deeply moved by, the Westport Country Playhouse’s 2011 production, so when she asked that I join the cast in this one, I didn’t hesitate to say “yes.”

Shortly after which I began hyperventilating at the thought of trying to represent one of these women’s moving and deeply personal words in front of an audience. But, as I often find with things that scare me, the reward far outweighs the fear.

When Kerri assigned each of the 14 participants a monologue, I sensed an air of gravity in the room, not so much because of the subject (and some are, indeed, quite difficult) but because of the weight of the responsibility of holding these women’s words in our mouths and delivering them with the care they deserve. When we rehearsed together, this group, largely unknown to each other before, coalesced and bonded strongly. We laughed a lot. Sometimes because the material was funny, sometimes because of the inevitable joking that came along with the subject material. We cried, too, because some of the stories cannot be heard without tears. We supported each other through stage fright and our own discomforts. I knew some of them casually at the outset; I left the stage Friday night with 13 new friends.

These stories tell of struggles and coming to term with sexuality, shame, violence, identity, relationships, and so much more. In our retelling, we advocated for not only each other, not only for those in the audience, but for the women whose voices we represented. We screwed our courage to the sticking place (Macbeth,I.vii) and, under Kerri’s expert and insightful guidance, pulled it together and pulled it off.

The 300 strong audience stood at the end of the evening, for us, for themselves, and for all women. To say it moved us all would grossly understate the feeling in the cavernous space. At the afterparty (where I finally started breathing again), we toasted each other and our fearless leader, and ate – let’s say very creatively decorated – cupcakes. I’m not sure I have ever said vagina so many times in such a short span of time, or ever will again, but as one friend said to me afterwards, “I have not felt that liberated in a long time.”

While we sat back and basked in the afterglow, Kerri reported that one of Ms. Ensler’s staff had come to see the show and told her that it was one of the best productions he’d seen. Another audience member asked where we would appear next – world tour, anyone?

I am so glad I said “yes” before I thought too much and let my fear paralyze me. I am very lucky to have 13 new besties. And I am especially grateful to have made even a miniscule impact on the lives of women not as fortunate as I.