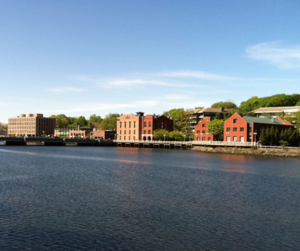 Westport sometimes gets a bad rap for reasons I won’t enumerate here. But I’ve found time after time that this vibrant, picturesque community defies those unkind stereotypes. And recently I’ve found my faith in town reconfirmed on, of all places, Facebook. There’s a little-known page (well, maybe not that little-known as it has nearly 2,000 members) called Westport Gift Economy. The administrators only require that you live in 06880 to join.

Each day members post various items that they no longer need and wish to gift to other members. Those desirous of the goods can post a comment, and the gifter will select a recipient based on first-come, first-served or some other equitable measure. I have both posted and received items on the website and have found that I’ve received much more than stuff. I’ve connected with a group of caring, thoughtful people with whom I’d likely have had no reason to interact.

Items range from clothing to home décor, to (unused, unopened) food, to baby and child supplies. Every now and then someone requests an item they need. The recipient arranges to pick up the item(s) via private message.

Why, you ask, just not drop the goods at Goodwill? Indeed, that’s a worthy option for decluttering. But we sometimes forget that not everyone in town is in the upper percentiles of income, and it’s nice to keep giving micro-local. And sometimes it’s just nice to know that you’ve given something to a neighbor who really appreciates it. I had two well-crafted, much-loved, very large rattan chairs from Crate & Barrel that I’d carted from home to home for many years. They simply did not fit into my new place, as much as I’d hoped they would. I felt really delighted when the recipient drove up in two cars into which she loaded both chairs, saying that these were just what she was looking for in a spot in her den. Even her teenaged son, driving the second car, seemed pleased.

My neighbor introduced me to the group, and she has gifted many gently used infant and toddler items to new and expectant parents – and met many of them in the process. I’ve requested a few items that had sentimental value to me but no longer had for their owners, including a set of ceramic hens that reminded me of my father. He collected chickens (not live ones) as kind of a joke, and since he died, my sister and I carry the torch. I picked these up from the sweet donor on the very day of the anniversary of his death, as if he’d sent them.

The group makes me feel more connected to a town I love already, and I’m grateful to its participants for working diligently to dispel any negative generalized misconceptions about Westporters.