My Life on the Post Road: In the Room 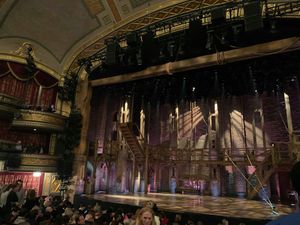 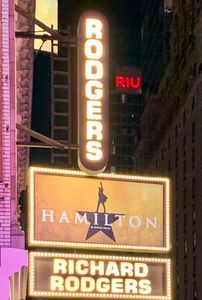 Finally – I was in the room where it happened, originally on July 13, 2015 in previews, and has been happening eight times a week since. At the Richard Rogers Theatre on West 46thStreet, where a revolution has taken place. Two, really: One that made us a country, and one that changed musical theater forever.

Mind you, I went with trepidation. How could anything live up to the hype? I’d begun to feel like one of the only people in the New York and London metropolitan areas that hadn’t seen it, so when a friend from Middlebury who works on Broadway (thank you, Katie) said she could get me access to face value house seats, I decided it was time. If I’d had to purchase tickets at scalper’s prices only Robert Downey Jr. as an escort would have satisfied me.

My bonus son (that’s what I’ve taken to calling my ex’s 10-year-old; he calls me his bonus mom) had seen it over the summer I was in England with his mom and my youngest son, and loved it. He has been singing the tunes ever since.

“Would you like to go see Hamilton with me this Saturday night?” I texted him on his iPad. I’d already secured seats and invited my ex and his wife as soon as they became available. “If I’m free.” Oh, this kid. “And if it’s ok with mom and dad.” “You can check with them,” I said, “but I’m pretty sure you’re free and they’re coming too!”

And so we endured the two-hour-plus ride into the city, strangled crosstown traffic, exorbitant parking rates, and overpriced mediocre theater-district food, to find ourselves in what I considered the best seats in the theater (thanks again, Katie), waiting for the revolution.

The house lights dimmed, and the stage lights rose, and the rest is literally history. For three hours D sat rapt beside me and sang every word to every song and pointed out very important facts to me: “That’s King George,” he whispered when the crimson-clad foppish monarch pranced on stage.

I have very little patience for musical theater these days – or frankly for theater in general. By the time you take out a second mortgage on your home to afford the whole ordeal, very few shows deliver bang for the buck. This one did, and more. Here’s why it not only didn’t disappoint, but delighted me:

A fun time was had by all, evidenced by the lively discussion we had about on the much less laborious drive home. We pondered motives and outcomes, reveled in facts new to us, and glowed with the vibration that the sound and fury (yes, Macbeth again) that infused us.

I’ve heard hushed whisperings comparing LMM to Shakespeare. I draw the line there. He’s got 37 plays, 154 sonnets, and 400 years to go to earn that honor, but the play undoubtedly lived up to, and perhaps even exceeded the hype. He and the cast and crew radiate genius. I was happy to be in the room where it happened.