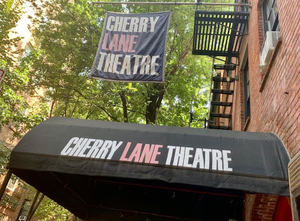 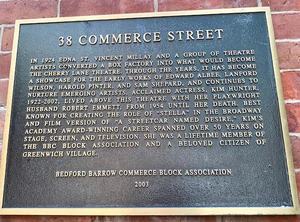 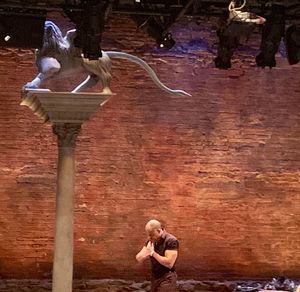 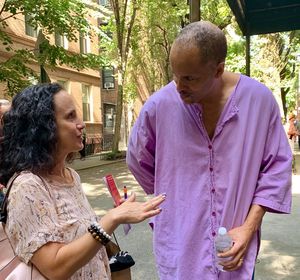 Keith Hamilton Cobb’s tour de force, American Moor, blew into the Cherry Lane Theatre’s Red Bull Theater this hurricane season with the force of the impending Carribbean storms. Montano’s assertion in Othello, “Methinks the wind hath spoke aloud,” proves as relevant on this small West Village stage as it did on the shores of Cyprus, where Shakespeare's classic is set. In this 90-minute, nearly one-man monologue, Cobb explores race through his experiences as an actor, specifically through an audition for the role of Othello.

I don’t think of Othello as a play about a storm – Shakespeare wrote another one that comes to mind in that category. While a storm does figure significantly into Othello's plot as it defeats an external enemy and delivers the main characters to the Cypriot shore to face their personal maelstrom, I think of it more as a play about power, jealousy, evil, and love, where race has a mighty influence on each of these themes. Cobb’s superbly written and acted piece encouraged me to see not only Othello through new eyes, but also to see the complicated issues of race through new eyes.

Cobb pensively paced the width of the stage as the audience entered. Set sparsely only with a few fallen columns on which he periodically perched, he took up a lot of the space with his stride and stature. Random theatrical detritus littered the perimeters, and a few folding chairs sat front and center. His gait was more like that of the triumphant winged lion that stood atop the column behind him than of one caged and nervous. He was the contemplative calm before the storm he was about to unleash on the audience. His imposing 6’4” frame filled the space even before his booming voice did. He captured our attention before he said a word.

And oh, the words! “I loved those words,” he tells the audience of his initial reactions upon first hearing Shakespeare. His world changed, he said, “when Willy walked in.” As a young actor, he wanted nothing more than to speak them, to act them.

And then he ran into the brick walls, just like the exposed ones that flanked the audience in the long, narrow theater. The brick walls of being black. They blocked him as he chose characters to portray: an acting coach ridiculed his wish to read Titania, Caesar, and Richard II. “Why don’t you stick to the Big O?” suggested the master. Oprah? Orgasm? Cobb said Othello wasn’t even on his radar screen. He hadn’t gotten the memo that if you’re a black Shakespearean actor, that’s your wheelhouse.

So he got to know, and came to love, the play. He pointed out that jealousy, according to the OED, connoted suspicion and fear as much as envy in early modern England. He could relate easily to those reactions. He lamented the young innocent black lives lost in the streets to gunfire. He described people crossing the street as he came toward them walking down city sidewalks, or, almost worse, his sensing how badly they wanted to do so but steeled themselves to resist out of some sense of political correctness or feigned civility.

He ran head on into a brick wall again when he embraced and auditioned to play the Moor. The wall, this time, manifested in the person of the white male director (played by Josh Tyson from an aisle seat in the auditorium) who presumes to tell him how a black man (in this case, the ‘Big O’) would and should feel when faced with the pressures and prejudices of the white society in which he lives and serves.

Designer Alan C. Edwards used lighting to great effect during ‘the audition’ segments of the play. The tempest brewing inside Cobb builds under subdued sepia lighting during which he shares his real feelings. These moments are the thought bubbles filled to bursting with rage from years of rejection, frustration, and dreams deferred. The harsh white lighting ironically masks him as a polite, cooperative actor tolerating the director’s suggestions because he wants a part. We wait, as we would watching Lorraine Hansberry’s A Raisin in the Sun, to see if the roiling fury will "...dry up...fester like a sore...or explode?” (Langston Hughes, Harlem) You’ll have to see the play to find out.

Cobb breaks the fourth wall often, in a metaphoric attempt to either morph those bricks into easily punctured theatrical props or to muster up the power to huff and puff and blow even the brick walls down. In doing so, he included and made us complicit, made us sit up and take notice. He forced us, through this special relationship to Shakespeare, to acknowledge – as if it weren’t obvious in the media daily – that race is as complicated and confounding issue for all of us today as it was for Othello. I had the opportunity to chat with Mr. Cobb after the performance. His imposing stature – even more so close up – belies an extremely gentle, pensive demeanor. Asked if the work reflected an actual experience he had, he bowed his head and closed his eyes, and then answered quietly that it was an amalgamation of a lifetime of such experiences.

As director Kim Weild notes in the program, “American Moor asks us to do the great work of empathy, to put fear aside...to see – really see an other.” Cobb’s writing and performance are forces as strong as any hurricane to reckon with. The path of destruction of old, biased views and misperceptions razed a path for healthy growth in a new social structure.