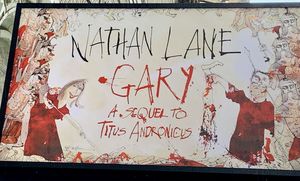 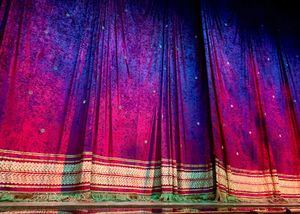 Titus Andronicus is one of Shakespeare’s earliest and bloodiest plays. There’s nothing funny about it. However, the heights of horror and depths of despair do require an attitude akin to that adopted while watching a Quentin Tarantino movie to make it through. Buckle in – it’s always a wild ride. I’ve been showered with blood and seen people leave precipitously and heard reports of people fainting and being sick during performances.

It amazed me, then, that Gary – A Sequel to Titus Andronicus – managed to take an equal amount of carnage and spurting blood, up the ante a bit, and end up with an audience belly laughing so hard that their own insides risked extruding much like those of the corpses' piled on stage. Director George C. Wolfe gave us an equally wild, albeit very different, ride.

The three actors, including the inimitable Nathan Lane, delivered impeccable and mostly comic performances. His entire persona, including gait, facial expressions, and gestures, is a perfectly timed and coordinated comic machine, evocative of Buster Keaton. Yet just like when I saw him portray Estragon in Waiting for Godot, he kept pathos bubbling just below the surface. Lane, as Gary the Clown, surreptitiously wipes off his makeup over the course of the play to reveal a much more serious and poignant side and message. Julie White as Carol just made me pee myself. ‘Nuf said. Despite the ongoing dragging and waggling of dead bodies and their various parts. Especially penises. Lots of them. If you’re not a fan of penises, this show may not be for you.

I don’t want to spoil anything for anyone planning to see this play. Suffice it to say that 90 minutes without intermission in the theater have never been simultaneously fun and thought provoking. It is comic acting at its best, with a serious undercurrent that examines violence, resilience, and existence. And if you sit near the stage, like I did, wear a rain poncho.