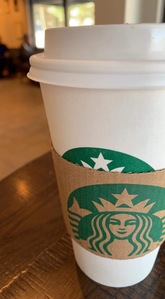 I sat in Starbucks the other day (that could apply to any and every day, really), minding my own business, sipping my decaf, reading a text for my lit course in Cambridge in July. I have a lot of reading to get through. May as well start early.

A man at a table clear across the café, in a cammo jacket and trucker hat, about 10 years older than I, pontificated loudly at his tablemate about the ills of the world. These included liberals and anything they believe and espouse on social media and in the press. He seemed particularly incensed about the notion of gender fluidity, and waxed decidedly unpoetic about that topic for quite a long, loud time. It was hard enough for me to concentrate on Declan Kiberd’s Ulysses and Us: The Art of Everyday Life in Joyce's Masterpiece, eventhough I’m enjoying every word. I couldn’t help but let his diatribe pull me out of Dublin.

“And if I drive a white pick up truck I supposed the @*&%#s would say I’m a bigot,” he railed. Well, I was pretty convinced that he was a bigot, having nothing to do with the color or size of his truck.

So I did what any modern girl does faced with a conflict like this: I asked the hive mind for advice. They quickly responded: Shelter in place, keep your distance, and only get involved and start recording if he attacks someone. One particularly cheeky boy wanted to know why I would bother with decaf. And of course the hive mind was exactly right. This man, no matter how badly he made me want to throw up and throw my hot coffee at him, had every right to his opinion and to share it. Despite his volume, he was ostensibly having a private conversation to which he was entitled without my intervention. I thought of what Michelle Obama said about going high when they go low, and decided it was indeed best not to get myself dirty by rolling in the mud with him.

A few years ago I found myself in a similar situation in a gym, on a treadmill, surrounded by men having a conversation over and around me about what an unpatriotic act it was to celebrate Cinco de Mayo. “A Mexican holiday. Why do we celebrate it here? What’s next, a Muslim holiday?” one of them said. I was too busy walking quickly (not running) to consult the hive mind, and I’d had enough. “What would be wrong with that?” I asked angrily. “Well, you know they kill people,” he replied. “They should all go home.” I was outraged but outnumbered; his friends were nodding and agreeing. “That is ignorant, you should be ashamed of yourself,” was all I said as I cut short my cardio to go pretend to lift a few weights that I’d preferred to have thrown at them.

This is a slippery slope and a delicate balancing act. I fully support everyone’s right to his or her opinion and to share it. It’s just hard not to respond when those opinions are so personally and morally offensive. I felt guilty. I felt my silence somehow validated the hate and prejudice he spewed. But I also absolutely know that nothing I could have said or done would have changed his mind, and I’d only have elevated my blood pressure and caused a scene. So thank you hive mind for reminding me that we can make our own point in a quieter, more mindful and compassionate way.