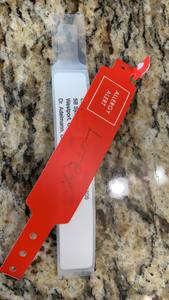 Although the NHS would have performed all my annual screenings while I lived in England, it seemed more of a hassle to try to get the records transferred here than to just wait until I returned. Also, I was pretty studiously ignoring the real world in ShakespeareLand.

So when I did get back, and forked over a king’s ransom to Anthem BC/BS for very little actual coverage, I queued up a relentless schedule of health check ups. I had my teeth scraped, my skin scrutinized, my bones scanned, my boobs squished, my private bits prodded, and… the jewel in the crown…

The colonoscopy. It’s no fun to talk about, and way less fun to do. But it is important enough to risk indiscretion to say that while the prep is, indeed, hellacious, it is one of the only screenings that can detect and stop cancer in its tracks in “one fell swoop” (Macbeth, IV.iii.219). According to my GI doc, my colon is “beautiful.” The event was shi**y, and I’m glad to have it behind me. And yes, awful puns fully intended and earned after that day and night of misery.

For me, entering this mediverse creates an enormous amount of anxiety, part genetic and part as a result of spending too much time in it while both of my parents died of cancer. I have also lost several friends recently – all too young – to cancer. So every time I feel a twinge anywhere or anticipate a routine screening exam, I freak out just a bit and feel convinced that I have cancer of the everything.

But the only way to know – and slay the relentless and unreasonable dragon of overwrought thought – is to know. So I work hard to overcome the fear of entering the mediverse, and just do it.