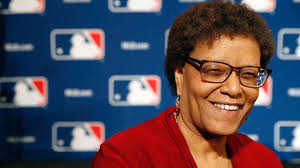 Veteran sportswriter and ESPN news editor Claire Smith will be the featured speaker at a lecture on Tuesday, Feb. 26, presented at Western Connecticut State University as part of Black Heritage-History Month.

Smith will discuss her long and accomplished career in a talk at 6:30 p.m. on Feb. 26 in Ives Concert Hall in White Hall on the Midtown campus. Snow date for the lecture is Feb. 27. Admission is free and the public is invited to attend. The lecture is hosted by the WCSU Office of Diversity and Equity.

Smith, who has been a news editor at ESPN since 2007, covered Major League Baseball for more than three decades. She became the first female MLB beat writer as a correspondent for the Hartford Courant in the 1980s, and worked for seven years as a national baseball writer and columnist for the New York Times and nine years as an editor and columnist for the Philadelphia Inquirer. The Baseball Writers’ Association of America elected Smith as the 2017 recipient of the J.G. Taylor Spink Award for laudable contributions to baseball writing, becoming the first woman and fourth African American to earn this honor. Her award is on permanent display in the "Scribes and Mikemen" exhibit in the Library of the National Baseball Hall of Fame and Museum in Cooperstown, New York.

For more information, send an email to This email address is being protected from spambots. You need JavaScript enabled to view it. or contact the Office of University Relations at (203) 837-8486.