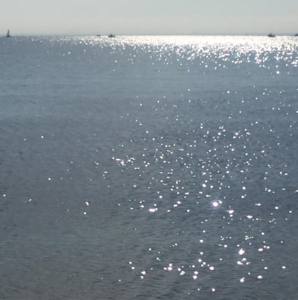 “Mom, you know you’ve got water dripping down the wall?” were not the words I wanted to hear from my oldest son who’d come to see what I’d done with the place I love/hate as he stood in the doorway of the powder room.

But indeed, clear liquid did drip from the pocket door track, down the frame, and pool on the wooden floor. So that’s what caused all those mystery stains. I wondered, not quietly or calmly, whence the deluge? The rain outside was, indeed, torrential, but the handyman Jose had recently sealed the roof with a double layer of tar, and I hadn’t noticed leaking before during even heavier storms.

I swore. I texted the landlord who texted Jose who came right over (he’s amazing). “There’s no water leaking from the roof,” he confirmed, surveying a decidedly dry attic. “It may be a pipe from the shower on the floor above,” he said (the fixtures are vintage 1970s cheap motel, so I immediately pictured all brand new shiny faucets) “but since the tub is all one piece [again, 1970s beige uni-shower/tub] you’ll probably have to take out the whole thing to fix it. Maybe the walls below, too, to see where the damage is.” I swore. A lot.

I texted the landlord who texted the plumber Craig who said he could come the next day (he’s amazing too). When he arrived I explained the situation and what Jose had said. “Let me have a look,” he said.

He turned the shower on, and we went downstairs to watch for the waterfall.

“How long do you shower?” he asked.

Wide-eyed, he said, “that is the exact length of the average American shower!” He seemed pleased. I felt either that I’d won a prize or was extremely mundane.

“We’ll wait seven minutes then, to see what happens.”

“OK, and in the meantime could I ask you a question about the kitchen faucet?” I mean, if you have a plumber in your home at someone else’s expense, with seven minutes to spare…

“Any idea why the water pressure is so piddling? It kind of drives me crazy when I wash dishes.”

He turned it on and off a few times and took it apart and removed some debris from the screen, put it back together, looked at me seriously and said: “Here’s my advice to you.”

Oh please, I thought, say I need new fixtures throughout the place!

“Really. This just isn’t important. You know, I wake up every day happy because I woke up. I try not to let little things get to me. I worry about only the things I can control. Which is nothing. If I find myself fretting, I breathe and try to stop.”

Struck momentarily dumb, I asked the sage tradesman, “do you practice yoga?”

“Well, you do already,” I said. “Thank you for that reminder.

It turned out that the drip was caused not by some catastrophic internal pipe leak but by a sloped, un-caulked tiled bathroom floor that allowed gravity to suck any water that escaped from the shower immediately to the floor below.

“Yeah,” he said as he caulked the gap, “life’s just too short. I try to stay positive.” Thank you, guru plumber.

I just lost another friend to cancer. The third in a short period, all under 50 years old. This one was to glioblastoma, 10 weeks after diagnosis. She, the daughter of another close friend I’d made in 1984 when I moved to Los Angeles. She, of the shining hair and glowing smile who spread joy always. She, who fell in love later in life and married a widower whose first wife had died of cancer. She, who unable to have children of her own had become the loving mother to his adorable son. She, gone.

“She told me she looked forward to being with her mother,” a friend of hers told me shortly after I learned of her death. Her mother had died a few years earlier – they were extremely close. I barely have words to express the depth of my sorrow over losing her and over the pain her family must be experiencing.

Often after a monumental loss like this we reflect and remind each other to not sweat the small stuff, and to hug those you love. It seems this wise plumber remembers those important life lessons every day.