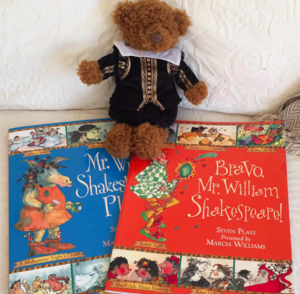 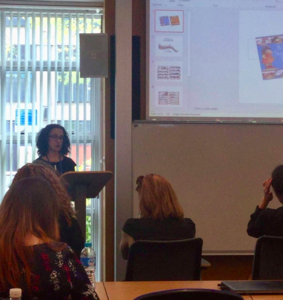 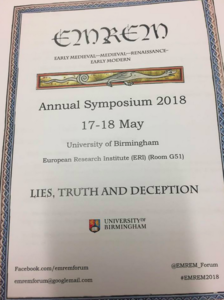 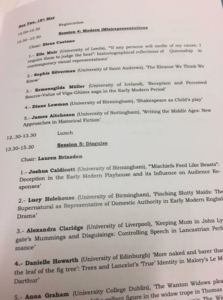 Why. Why why why. I repeat this refrain for the entire walk to the train station. It’s 6:45 a.m. I could be in bed. I could be jumping out of an airplane. At this moment I’d rather do that than board the train to Birmingham so I can stand up in front of 25 people to talk about children’s adaptations of Shakespeare. Which is exactly what I’m going to do. Voluntarily. At the Early Medieval-Medieval-Renaissance-Early Modern Forum’s annual symposium on “Lies, Truth, and Deception.”

Why.  What possessed me to submit an abstract for consideration and then accept the position they offered me in the line up?

The same things, I suppose, that brought me here in the first place: 1. I am a Shakespeare geek, and 2. It scared me.  While I probably wouldn’t actually jump out of a plane (unless, maybe it involved Shakespeare in some way), I have found that comfort and complacency are overrated, and that ennui is more troubling than fear.

So I edited my paper, created my first PowerPoint, and put on a prim black dress in which I vaguely resembled an Amish housewife in mourning, and took the train to Birmingham.

Two other classmates who would also present papers provided tremendous support before, during, and after the presentation. We commiserated, listened to each others’ papers, and reminded ourselves that our most dreaded scenarios of embarrassing crash-and-burn fainting or vomiting mid-sentence were also the least likely to occur. Many friends and loved ones here and across the pond sent much needed and appreciated encouragement as well.

What did actually happen? I spoke for 20 minutes about Shakespeare for children and even muddled through the PowerPoint. There were no inappropriate bodily functions, and I remembered to breathe and look up at the audience occasionally. They did applaud and did not throw rotten tomatoes. I finished up and sat down.

What did I learn? A lot about stuff from a long time ago: Icelandic sagas, Nottingham battles, and the significance of trees in Le Morte D’Arthur. And that what we fear the most only has power when we avoid it. So, one down and two more to go. I’ll talk about children’s Shakespeare again at the upcoming BritGrad conference, and about the blurred boundary between humans and beasts at the Centre for Renaissance and Early Modern Studies conference in July.