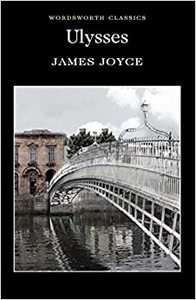 Mark Schenker of Yale College, who presented a series of four talks on Homer’s Odyssey earlier this year, returns to the Wilton Library on Sept. 26 with a four-part lecture series on James Joyce's Ulysses viewed through the lens of Homer's epic. The series will run on Sept. 26 and Oct. 3, 10, and 17 from 3 - 4 p.m. via Zoom and the Library's YouTube channel.

While James Joyce’s Ulysses (1922) differs significantly from Homer’s Odyssey (8th century BC), there’s no denying the many resonances between the two works, including correspondences between Odysseus-Bloom, Telemachus-Stephen, and Penelope-Molly. The two works are intimately joined in the depiction of a homeward journey that is extended and delayed by incidents variously mundane and momentous. In each case, the final homecoming is informed by all that has transpired to bring the hero back to where he first set out

There is no charge for the program; advance registration is required. Register online to receive the Zoom session invitation or YouTube streaming link. Please note: you will automatically be registered for all four sessions in the series. Please email Michael Bellacosa at This email address is being protected from spambots. You need JavaScript enabled to view it. with any questions.
Attendees will get the most out of these four lectures if they have some familiarity with The Odyssey and are able to follow along in their reading, or re-reading, of Ulysses as the series progresses. Dean Schenker will speak on the chapters in order, covering four-five in each session.
Mark Schenker has been at Yale College since 1990 and is currently a senior associate dean of the College and Dean of Academic Affairs. A former lecturer in the English Department at Yale, he received his Ph.D. from Columbia University with a concentration in 19th-century and early 20th-century English literature. For over 30 years, Dean Schenker has lectured on literature and film and has led book discussion series in more than 100 venues in Connecticut, including public libraries and retirement communities, museums and cultural centers.