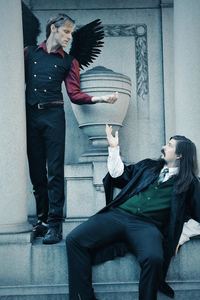 Hudson Shakespeare Company of New Jersey will return to Stratford on Saturday, Oct. 12 at 2 p.m. for a special Halloween season offering of “Doctor Faustus.” The company, which has brought its summer series of outdoor Shakespeare for the last several seasons to Stratford, will perform “Doctor Faustus” in the Library’s Lovell Room.The fully-staged and costumed performance is free and open to the public. Doors will open at 1:30 p.m. for general seating.

Doctor Faustus, the German intellect, has risen to the height of his profession but still wants more via the world of magic. He decides on magic and calls upon Mephistopheles, a servant of the devil, for his help. Faustus makes an offer the devil can't refuse - he will sign away his soul in exchange for 24 years of life and Mephistopheles at his beck and call in order to discover the secrets of life. Faustus then embarks on a journey through time and space in order to discover all of life's meaning. Who will he meet? Where will he travel to? What will he learn? And ultimately - what happens when his time is up?

The Stratford Library is located at 2203 Main Street in Stratford, Conn. For further information, phone (203) 385-4162 or visit stratfordlibrary.org.