Drama Discussion Series “Play It Again, Square One” at Stratford Library on March 19 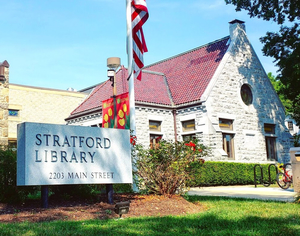 The Friends of Square One Theatre, in conjunction with the Stratford Library, will continue the 14th season of its popular three-part series, “Play It Again, Square One” on Tuesday, March 19 at 12 p.m. The drama discussion series looks at recent productions by Stratford’s Square One Theatre Company and offers patrons the opportunity to explore and discuss aspects of the play they saw.

According to Friends President Carole Fanslow, the program continues to fill a void for theatergoers:  “This series has proved to be a great success.  We are grateful to Tom Holehan, the actors and the Stratford Library for helping us to bring this unique program to our members and the theatergoing public.”

The discussion is free and open to the public. Coffee and tea will be served.

The Stratford Library is located at 2203 Main Street in Stratford, Conn. For more information call (203) 385-4162 or visit stratfordlibrary.org.