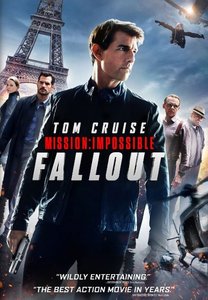 The Stratford Library's film series resumes Jan. 14 at 12 p.m. The series offers free showings of recent, popular films shown uncut and on widescreen. The Winter 2019 schedule is as follows:

Ethan Hunt (Tom Cruise) and his IMF team are in a race against time after a mission gone wrong. Henry Cavill, Angela Bassett and Vanessa Kirby also star in this blockbuster hit. PG:13, 147 minutes

In this heartwarming live action adventure, the young boy who loved embarking on adventures in the Hundred Acre Wood has grown up and lost his way. Now it is up to his childhood friends to venture into our world and help Christopher Robin remember the loving and playful boy who is still inside. PG, 104 minutes

Based on the blockbuster novel, this delightful romantic comedy charts a young woman’s discovery about her boyfriend’s extremely wealthy background. PG:13, 120 minutes.

The riveting true story of NASA's mission to land a man on the moon focuses on Neil Armstrong (Ryan Gosling) and the years 1961-1969. Claire Foy co-stars as Janet Armstrong. PG:13, 138 minutes

A STAR IS BORN

Bradley Cooper directs and stars with Lady Gaga in this critically acclaimed remake of the 1954 classic about the romance between a legendary singer and the star he discovers. R, 135 minutes

The Stratford Library is located at 2203 Main Street in Stratford, Conn. For further information, call the Library at (203) 385-4162 or visit stratfordlibrary.org.