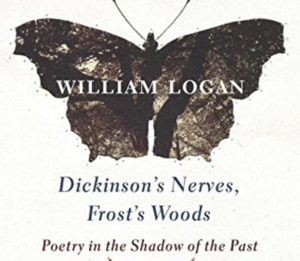 Autumn Poetry with Judson Scruton returns to the Wilton Library for four Wednesdays: October 3, 10, 17, and 24. The sessions begin at 10:30 a.m. During this four-part series, Scruton will lead participants in a close reading of five pairs of poems in the context of William Logan's new book, "Dickinson’s Nerves, Frost’s Woods, Poetry in the Shadow of the Past."

Poems often live in the shadow of other poems. Poet and critic Logan’s book analyzes various shadowings using pairs of poems to explore the different ways poems speak to each other. In his book Logan argues that the critic’s job is to 'drag poems back to the world in which they were made, to restore the lost background of their creation, while knowing that history has sometimes been used to bully poems and their authors.'

Using Logan’s various 'historical-biographical-archeological' tools in addition to close reading, participants will read and discuss four sets of poems that Logan analyzes and see where they would agree, disagree, or modify the understanding provided by his comparisons.

The schedule is as follows:

October 10: Robert Frost’s 'The Draft Horse' and Richard Wilbur’s 'The Ride'; Robert Frost’s 'Stopping by Woods On A Snowy Evening' and Emily Dickinson’s 'After Great Pain, A Formal Feeling Comes'

Judson Scruton M.A (The Johns Hopkins University, The Writing Seminars, specializing in poetry) has taught creative writing and literature at prep schools and universities. In his career as an educator Judson has also directed publications, communications, public relations, and development at a variety of educational institutions in the U.S. and U.K. including the Newberry Library in Chicago. He is currently an Adjunct Professor of English at Fairfield University.

Poetry packets are available at front desk beginning one week before the seminar begins; in addition, the library will have copies of Logan’s book available for use in the Library.

There is no charge for the program. Advance registration is required. To register, please click call 203-762-6334 or visit the library online. By registering for the first session you will automatically be registered for all four sessions.