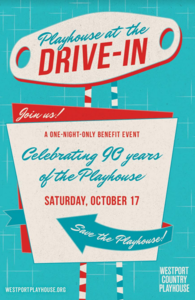 Westport Country Playhouse will present “Playhouse at the Drive-in,” a one-night-only benefit event and screening of special filmed performances and a short-form documentary celebrating the theater’s 90-season history, on Saturday, Oct. 17, at the Remarkable Theater Drive-in, 47 Imperial Ave., Westport. The event is also available for online screening at home. Gates open at 5 p.m. for a cocktail hour and picnic dinner. The screening from attendees’ own cars and online begins at 6:30 p.m. Due to the pandemic, “Playhouse at the Drive-in” is in lieu of the theater’s annual Fall Gala fundraiser.

The benefit evening will be highlighted by a short-form documentary saluting the Playhouse, its history, and many of the artists who have lit up the stage. It is created exclusively for this event by Playhouse artistic director Mark Lamos and filmmaker Douglas Tirola, who is also the director. Tirola was raised in Westport and is a current resident. One of his first jobs as a teenager was as a Westport Country Playhouse beautifier. Tirola’s films have premiered at festivals around the world including Sundance, Berlin, Tribeca, and SXSW. His movies have also been released on HBO, Netflix, PBS, and Showtime. He is president of New York-based 4th Row Films.

The evening will include filmed performances by Playhouse alumni and friends Kate Baldwin; Britney Coleman; Tina Fabrique; The Naughton Family, featuring James Naughton, Greg Naughton, Kelli O’Hara, and Keira Naughton; Brenda Pressley; Amanda Robles; and a special performance by André De Shields.  Filmed appearances will be made by Jane Alexander, Lissy Newman, Christopher Plummer, Stephen Sondheim, Richard Thomas, and many more who have been associated with the historic theater.

Lamos noted, “Though you can't be in the Playhouse proper right now, you can relive favorite memories and hear behind-the-scenes tales from stars and stagehands, staff, donors, trustees, and longtime audience members - people who have made a difference to the life and the ongoing health of the Playhouse over its extraordinary history.

“Our survival now depends more than ever on your belief in the Playhouse and your generosity,” said Lamos. “Please join me (I won't be virtual, I'll be there) at the Remarkable Theater for a really fun evening. It's a completely unique event, and you won't want to miss it.”

For more information, to purchase tickets, or to become a sponsor, please contact Gretchen Wright, Playhouse director of development, at (858) 945-0493 or This email address is being protected from spambots. You need JavaScript enabled to view it. .