Frank Stella's Stars, A Survey Opens at The Aldrich on September 21 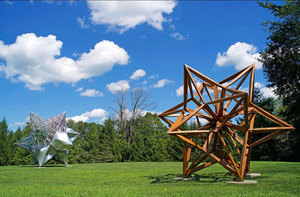 Frank Stella’s Stars, A Survey, the artist’s first solo exhibition at The Aldrich Contemporary Art Museum, will be on view in the Museum’s galleries and Sculpture Garden from Sept. 21 to May 9, 2021.

Spanning more than 60 years, Frank Stella’s studio practice has pushed abstraction to the limits, investigating every category from painting and printmaking to sculpture and public art. Among the myriad of forms found in Stella’s work, one element continuously reappears, a motif that is simultaneously abstract and figurative: the star. Immediately identifiable, the star stands out amidst the tangle of abstract, invented forms the artist has explored over his long career. Under the spotlight for the first time, this exhibition surveys Stella’s use of the star, ranging from two-dimensional works of the 1960s to its most recent incarnation in sculptures, wall reliefs, and painted objects from the 2010s.

Stella’s use of the star form emerged during his first decade in New York as he was exhibiting his groundbreaking striped and shaped paintings. It then vanished and resurfaced many decades later at a moment when he committed himself to three-dimensional abstraction. Today, the star is the lead in scores of works from small objects to towering sculptures. Scaled to the table or the open air, Stella’s star works transport us—we imagine how disparate elements shift, how parts are assembled, how paint is applied. The works parade an outsized material resourcefulness that collapses analogue and 21st century fabrication techniques: RPT (rapid prototype technology) plastics, teak, aluminum, stainless steel, birch plywood, fiberglass, carbon fiber, and more. With their automotive neon hues, shimmering and natural finishes, the stars, big and small, flex and project a spatial dynamism that intimates a potential maneuverability—as if they were built to perform.

At The Aldrich, Stella’s star works will be on view outdoors throughout the Museum’s grounds and inside the galleries. Outside, large-scale sculptures will be sited from Ridgefield’s historic Main Street, the Museum’s semi-enclosed interior courtyard, and two-acre Sculpture Garden. Inside, the exhibition will occupy the entire ground floor including the Museum’s Project Space where the largest sculpture in the exhibition, Fat 12 Point Carbon Fiber Star (2016), challenges the room’s perimeter with its 12 puffed up rays stretching 21 feet in all directions. The star is characterized in this survey as a breakthrough element. From a simple, planar shape to an ornamented spatial object, its manifestation reveals stylistic continuity amidst decisive variation.

The Museum’s founder Larry Aldrich showed early interest in Stella’s work and exhibited Tetuan (1963) one year after he founded The Aldrich. Additionally, the Larry Aldrich Foundation Fund, established in 1959, supported the Museum of Modern Art in purchasing Stella’s painting The Marriage of Reason and Squalor, II—the first work by the artist to enter their collection. Since the Museum’s founding in 1964, Stella’s work has been included in fifteen group exhibitions.

Frank Stella (b. 1936, Malden, MA) has created an exceptional body of work over his six-decade career. Spanning painting, sculpture, and printmaking, his work is held in more than fifty public collections including the Museum of Modern Art, New York, the Whitney Museum of American Art, New York, and the National Gallery of Art, Washington, DC. Stella currently lives and works in New York.

The exhibition will be accompanied by a full-color 150-page hardbound catalogue, featuring essays by the exhibition’s curators Richard Klein and Amy Smith-Stewart.