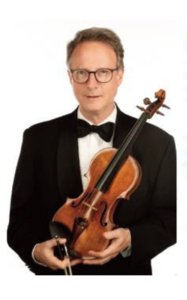 As the world celebrates the 250th anniversary of the birth of Ludwig van Beethoven, The Ferguson Library is delighted to partner with the Stamford Symphony to present three programs exploring the creative periods of the composer's life, featuring Stamford Symphony violinist and educator Gabriel Schaff. This program is the first of the series and will be shown on the Library's YouTube channel. The series debuted on July 22, will continue on Sept. 15 with Heroism of the Everyman, and conclude on Dec. 16 with An Invitation to a New World. Location and times to be announced.

Gabriel Schaff writes: "Beethoven's music grabbed the world by the ears and imagination. Fueled by his passionate intellect from within and as a witness to profound world changes, he single-handedly altered the direction of music for future generations. His music opened the door to wider forms of expression and introspection which continue to influence and inspire composers and performers of today. There has not been a time in the past 200 years where Beethoven's music has not been at the forefront of both the concert hall and people's hearts. Come hear the three periods of Beethoven's music--Early, Middle, and Late--demystified."

A native of Philadelphia, violinist Gabriel Schaff studied with the Curtis String Quartet at the New School of Music before moving to New York City at the age of 17 as a scholarship student and assistant to Erick Friedman at the Manhattan School of Music. Mr. Schaff is an active chamber musician, and teacher on the secondary and college levels. In addition to international appearances, he created the Englewood Chamber Players, dedicated to performing educational and historical concerts for the communities in which they live, as well as for those underserved by live classical performances. He is the author of books and articles pertaining to the history of the violin family and the music written for it, most notably "The Essential Guide to Bows of the Violin Family" and "Rediscovering Haydn's Three Original Violin Sonatas". Current activities include an exploration of music by women composers in celebration of the centennial of the 19th Amendment, and lectures and concerts on the evolution of the compositional styles of Ludwig van Beethoven, in celebration of his 250th birthday.