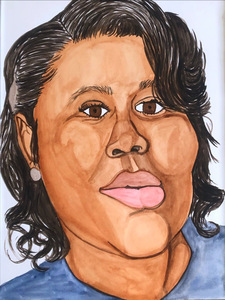 Rudy Shepherd: Somebody’s Child will be on view at the Museum July 18 to Nov. 29.

Law enforcement’s fatal toll on Black and Latinx lives has induced anger and anguish, fueling a movement for racial justice and police reform that has spread across all fifty states. Shepherd’s installation not only mourns and humanizes these tragic losses, but also raises awareness of systemic racial inequality and historic police brutality.

Shepherd has been working on his Portraits series since 2007. His earliest portraits portrayed Black men accused of crimes, but not yet convicted, and prejudicially villainized by the press. As the series grew in scope and scale, Shepherd widened its focus to include luminaries, visionaries, terrorists, spiritualists, victims, and their perpetrators. Today, the series spans more than 400 works, each uniformly measuring at the intimate scale of 12 x 9 inches. Each portrait is made within days of the media’s reporting, eliciting an emotional response that establishes compassion by “reclaiming victims’ humanity.” Executed in watercolor, a medium that best matches the fleetingness of the news cycle, their individual presence embodies an arresting stillness. Accompanying the portraits is an audio piece by Shepherd about the project.

Induction Ceremony, commissioned by The Studio Museum in Harlem, was performed live at Jackie Robinson Park on October 9, 2016. The video documentation shows Shepherd as The Healer, a numinous being inspired by Sun Ra, composer, musician, poet, and pioneer of Afrofuturism. The Healer interacts with a monumental public artwork by Shepherd, Black Rock Negative Energy Absorber, 2016, to an improvised score played by an experimental music collective. Shepherd’s performance signifies a spiritual healing, where destructive forces like racism, exclusion, and trauma are purged through empathy and positive energy.

The Museum will be producing a poster on the occasion of this exhibition with 100 percent of the proceeds going to Color of Change.

A selection of Shepherd’s Healing Devices (2010–2017) were included in the group exhibition, Objects Like Us, curated by Amy Smith-Stewart and artist David Adamo at The Aldrich in 2018.

Rudy Shepherd (b. 1975, Baltimore, MD) received a BS in Biology and Studio Art from Wake Forest University and an MFA in Sculpture from the School of the Art Institute of Chicago. His work has been included in group exhibitions including MoMA PS1, The Studio Museum in Harlem, The Bronx Museum of the Arts, Art in General, Socrates Sculpture Park, and the Museum of the City of New York. Selected solo exhibitions include HUB-Robeson Galleries at Penn State University, Dickinson College, Smack Mellon, Mixed Greens Gallery, and the Miller Gallery at Carnegie Mellon University. He has been awarded artist residencies at the National and International Studio Program at MoMA PS1, Artist in Residence Visual + Harlem at the Jacob Lawrence Institute for the Visual Arts, the Emerging Artist Fellowship at Socrates Sculpture Park, Location One International Residency Program and the LMCC Arts Center Residency at Governors Island. He lives in New York City and works in Yonkers, New York.