Celebrate the 45th Anniversary of The Rocky Horror Picture Show at The Ridgefield Playhouse on Oct. 26

Details
Published on Friday, 18 October 2019 10:47
Written by The Ridgefield Playhouse 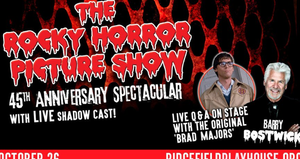 The Ridgefield Playhouse's 45th anniversary screening of The Rocky Horror Picture Show on Oct. 26 will include a live on stage Q&A with Barry Bostwick (Brad). The screening will include the original unedited movie with a live shadow cast and audience participation, plus a memorabilia display, costume contest, and more. The event begins at 7:30 p.m.

Based on the hit play with music, book, and lyrics by Richard O’Brien, who also co-wrote the screenplay and played ‘Riff Raff’ on stage and in the film, The Rocky Horror Picture Show was a phenomenon in the mid-70s that had teenagers dressing in drag, throwing toast, shouting lines at the screen such as “Superman!” (when actor, Barry Bostwick as Brad, removes his Clark Kent-type glasses) shooting squirt guns during the rain scene, and acting out the film in front of the screen. Lines of costumed movie-goers would form around the block for the midnight screenings of the darkly comic, gender-bending musical horror film that gave young people who were a bit different a place to come together and feel accepted and safe together.

The plot focuses on a seemingly normal couple, Brad & Janet (Barry Bostwick and Susan Sarandon) who break down on a rainy night and seek assistance at a creepy house inhabited by mad-scientist, Dr. Frank-N-Furter (Tim Curry) a ”sweet transvestite from transexual Transylvania.” Afraid and horrified at first, Brad and Janet soon fall under his spell and find themselves a part of the merry melee. The film is a parody of and tribute to the B movie horror films and science fiction films of the 1930s. Among other hilarious and unexpected moments, the film features an appearance by rock star, Meat Loaf who sings “Hot Patootie.”