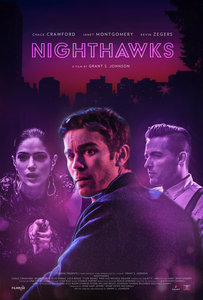 This stylized film features an elitist secret society in New York City as it tries to dissect a crime recently committed against one of its own. Nighthawks will be released on DVD and Blu-ray and for sale and rental on iTunes, Prime Video, and Google Play beginning Oct. 3.

Chace Crawford stars as wide-eyed Midwest transplant Stan, who agrees to play wingman to his calculating and privileged roommate Chad (Kevin Zegers). They embark upon an exploration of glittering New York nightlife, whose darkest secrets are held captive by a group of artistic and influencer-hopeful millennials known as Nighthawks. The evening becomes increasingly surreal as it continues into an interrogation of mysterious past events.

Nighthawks is written, directed, and produced by Grant S. Johnson. John N. Hart, Jr. and Jeff Sharp, producers of “Boys Don't Cry,” “You Can Count on Me,” and “Nicholas Nickleby,” and Peter Pastorelli (“Beasts of No Nation”) are producers.

Nighthawks has a running time of 90 minutes and is not rated.