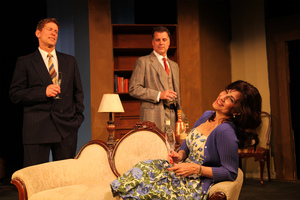 Westport Community Theatre is staging Dial M for Murder by Frederick Knott. Performances take place from June 7 through June 23, on Fridays and Saturdays at 8 p.m. and Sundays at 2 p.m. A Thursday performance will be held on June 13 at 8 p.m. Carole Claps directs the play, which is produced by Rachel Konstantin. The WCT cast of veteran actors includes Deborah Burke, Tim Cronin, Phil Lorenzo, Tom Petrone, David Pollard, and Frank Speranzo.

In Dial M for Murder, Tony Wendice has married his wife Margot for her money and plans to murder her for the same reason. He blackmails a scoundrel into strangling her and arranges a brilliant alibi for himself. Following unforeseen events, the story culminates into almost unbearable suspense, guaranteed to keep audiences on the edge of their seats. Dial M for Murder had a highly successful run on Broadway and the road.

Dial M for Murder is produced by arrangement with Dramatists Play Service. Tickets are $25 ($23 for seniors and $15 for students) and can be purchased at westportcommunitytheatre.com or by calling (203) 226-1983.