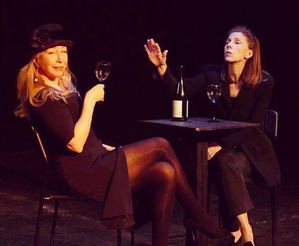 Norwalk's Theatre Artists Workshop will present Eight Easy Pieces, an evening of eight short plays by award-winning playwright Jack Rushton from Friday, May 17 through Sunday, May 19. Performance times are 8 p.m. on Friday and Saturday and 3 p.m. on Sunday.

“Jack’s work is must-see theater, funny, sad, clever, and always compelling,” says Stephanie Hazard, producer, director, and actor. “It will be an outstanding night of theater, filled with surprises.”

Two dozen of Jack’s plays have been performed at more than 75 festivals around the country, including his “George’s Radio” which won the prestigious Andaluz Award at The Fusion Theater’s The Seven in 2017.

“These are eight of my favorites and some of my best,” says Jack, “I wrote two of them just for this show, and the others have been performed at great venues, including The Boston Theater Marathon, Silver Springs Stage Co, and The Players Theater in NYC, to name a few. I’m thrilled to bring this collection to TAW.”

“Jack is one of our most prolific playwrights,” says Mike Boland, TAW President, “His Eight Easy Pieces are directed and performed by our finest Workshop talent, and we are excited to have his work support our mission. Fasten your seat belts, it should be a hell of an evening.”

“Acclaimed TV and film actor, James Noble, called this Workshop his church,” says Stephanie Hazard. “Jim passed away March 28, 2016, and we are dedicating this show in his memory because it is Jim’s passion which continues to bring out the best in all of us.”

All proceeds will benefit The Theatre Artists Workshop, located in Norwalk, Conn.