WCSU to present screening of film Measuring the World April 10 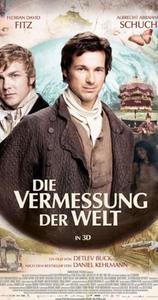 The lives and legacies of two of the world’s most celebrated intellectual giants of the 18th and 19th centuries will be recalled with a presentation on Wednesday, April 10, of the film “Measuring the World” at Western Connecticut State University.

The 2012 film directed by Detlev Buck, based on the novel by Daniel Kehlmann, offers a dramatized portrayal of the personal stories and intellectual genius of the German mathematician and physicist Carl Friedrich Gauss and the German humanist, naturalist and explorer Alexander von Humboldt. The screening will be at 3:30 p.m. in Room 025 of White Hall on the university’s Midtown campus, 181 White St. in Danbury. The presentation will begin with introductory remarks offered by Visiting Assistant Professor of Mathematics Dr. Todd Trimble, about Gauss; and by Professor and Chair of the World Languages and Literature Department Dr. Galina Bakhtiarova, about Humboldt.

Admission will be free and the public is invited.

Gauss, who lived from 1777 to 1855, is universally recognized as one of the preeminent mathematicians of the modern era, whose wide-ranging achievements made pioneering contributions to knowledge in diverse fields including number theory, algebra, geometry, astronomy, magnetism and geodetic surveying. Humboldt, whose life spanned nearly 90 years from 1769 to 1859, brought the modern scientific tools of measurement and analysis to his explorations of vast and previously uncharted lands in the Americas and central Russia. Humboldt’s scientific work resulted in enduring contributions to diverse fields of study from botany, geology and geography to ecology and meteorology. His master work “Kosmos,” published in several volumes, sought to provide a holistic scientific understanding of the physical world.