The Bolshoi Ballet’s production of The Sleeping Beauty in HD at The Ridgefield Playhouse, FREE tickets for kids 18 and younger 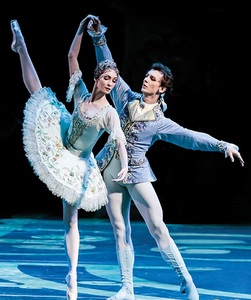 The Bolshoi Ballet’s production of The Sleeping Beauty comes to the Ridgefield Playhouse's movie screen in HD on Sunday, March 10 at 2 p.m. On her 16th birthday, Princess Aurora falls under the curse of the evil fairy, Carabosse and into a deep slumber lasting 100 years. Only the kiss of a prince can break the spell. The ballet features scores of magical characters including fairies, the Little Red Riding Hood, Puss in Boots, and young Princess Aurora performed by Olga Smirnova, a “truly extraordinary talent” (The Telegraph). Tickets are free for children 18 and younger.

This Russian masterpiece was commissioned in 1888 by Ivan Vsevolozhsky, the director of Russia’s Imperial Theater, with Petyr Tchaikovsky as composer. It is the second of Tchaikovsky’s ballets, preceded by Swan Lake. Based on Charles Perrault’s original fairy tale, La Belle au bois dormant, Tchaikovsky worked from The Brothers Grimm version of the tale and (together with Vsevolozhsky) incorporated other characters from their oeuvre such as Puss in Boots, Little Red Riding Hood, Beauty and the Beast, and Cinderella.

The Bolshoi Ballet (“Great Ballet” in Russian) is the leading ballet company of Russia, famous for elaborately staged productions of the classics and children’s ballets that preserve the traditions of 19th-century classical dance.