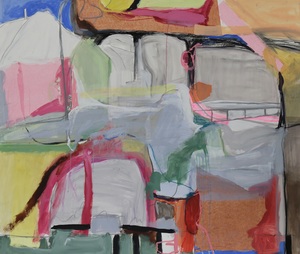 According to Mark Schiff, who organized the Firing Circuits artists, “When Ed MacEwen [Wilton Library’s art chairman] contacted me about this show, I was excited. When I then brought the opportunity to the artists, they all said ‘they would love to participate.’”

Ed MacEwen noted, “Mark is a wonderful, colorful artist and personality who had exhibited a number of pieces previously at the library. I thought if he had a few artists like himself at Firing Circuits, we would have a highly skilled and bountiful exhibition. The proof is on the walls.”

The group of artists known as Firing Circuits Studios was born out of an abandoned factory building in Norwalk, Conn. about 12 years ago. The building was originally built in the early 1900s and housed the Connecticut Lace Works. The industry thrived until the 1960s after which it was home to Firing Circuits, an electrical components firm. The business is long gone, but the letters are still proudly displayed on the building, hence it became the name of the burgeoning artist colony of close to 30 artists.

The studio artists work in an array of mediums, including oils, watercolors, mixed media and sculpture, which are on exhibit at Wilton Library from November 13 through December 26. The majority of the works are available for purchase with a portion of the proceeds benefiting the library.