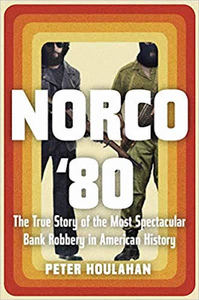 Named one of their "Summer Reads" by the New York Times, Norco ’80: The True Story of the Most Spectacular Bank Robbery in American History by Connecticut author Peter Houlahan brings to life the story of how five heavily armed young men, led by an apocalyptic born-again Christian, attempted a bank robbery that turned into one of the most violent criminal events in U.S. history, forever changing the face of American law enforcement. On Tuesday, July 9 from 7 - 8:30 p.m., Bethel's Byrd's Books will host Peter Houlahan for a book signing and discussion of Norco ’80, called "one of the best true crime accounts ever written" by Gangsterland author Tod Goldberg.

The  event is free and open to all. To save a spot or pre-order a book, click here.
“On May 9, 1980, what usually happens only in action-thriller movies came to life in Orange Country, California. I don’t usually read true crime," writes Shannon Aiden of the Literati Bookstore in Ann Arbor, MI, "but Houlahan’s writing pulled me in. While reading this meticulously researched and documented account, I could almost smell the gunpowder, hear the cacophony of gunfire making my ears ring, and see the dust clear as the largest crime scene in American history came into view. Documented here is how an attempted bank robbery and its subsequent trial would forever change a town, its people, and law enforcement nationwide. The crime and court case may have been an unbelievable firestorm catastrophe, but this book is pitch-perfect.” Alice Hutchinson, owner of Byrd's Books, concurs, "Norco '80 is a must. Peter's first book is a chilling and exceptional read."
Peter Houlahan holds an MFA from Sarah Lawrence College. In his career as an emergency medical technician, he has contributed to a number of articles related to his profession, including the impact of PTSD on first responders. A native Southern Californian, Houlahan now lives in Fairfield County, CT. To find out more about the author, visit, www.peterhoulahan.com/
Byrd's Books is located at 178 Greenwood Avenue in Bethel.