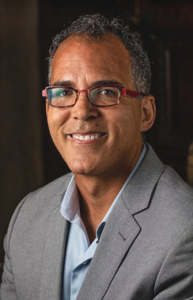 Due to the impending winter storm, Westport Country Playhouse has announced that the 13th Annual Dr. Martin Luther King Day Celebration, scheduled for Sunday, Jan. 20 at 3 p.m., has been postponed. A new date is in the works and will be announced soon by co-sponsors the Westport/Weston Interfaith Clergy, The Westport Library, Westport Country Playhouse, the Westport/Weston Interfaith Council, and TEAM Westport.

Pulitzer Prize winner for Nonfiction (2018) and Yale Law professor James Forman, Jr. will be the keynote speaker at the 13th Annual Dr. Martin Luther King, Jr. Celebration on Sunday, Jan. 20 at 3 p.m. at Westport Country Playhouse. Forman’s Pulitzer Prize-winning book is “Locking Up Our Own: Crime and Punishment in Black America.”

The event is free-of-charge and open to the public. However, advance registration is encouraged through the Playhouse box office at (203) 227-4177 or by email at This email address is being protected from spambots. You need JavaScript enabled to view it. . Registration is required to take advantage of free childcare for children ages 12 and under, provided by the Westport/Weston Family YMCA in the Lucille Lortel White Barn, Sheffer Studio adjacent to the theater.

On behalf of the Westport/Weston Interfaith Clergy and Interfaith Council, Rev. Alison J. Buttrick Patton, pastor, Saugatuck Congregational Church, UCC, said, “For several years, our annual interfaith celebration has tapped the knowledge of renowned scholars engaged in the critical work of unpacking and dismantling racism. This year, we welcome Professor Forman to offer the keynote on the continuing impact of racism in our society.”

Harold Bailey, Jr., chair of TEAM Westport, stated, “Since the 1970’s, the meteoric rise of incarceration in the U.S. has left us with a per-person incarceration rate that is the world’s largest, with black male incarceration five times larger than its white counterpart.  In his Pulitzer Prize-winning work, Forman brings a unique perspective to a largely uncovered but undeniably critical aspect of this story.

“Steeped in legal experience and grounded in the civil rights heritage into which he was born, Forman’s insights are key to both how we got where we are and how we should most effectively move forward to remedy it,” added Bailey.

James Forman, Jr. attended public schools in Detroit and New York City before graduating from the Atlanta public schools. After attending Brown University and Yale Law School, he worked as a law clerk for Judge William Norris of the Ninth Circuit Court of Appeals and Justice Sandra Day O’Connor of the U.S. Supreme Court. After clerking, he joined the Public Defender Service in Washington, D.C., where for six years he represented both juveniles and adults charged with crimes.

Professor Forman loved being a public defender, but he quickly became frustrated with the lack of education and job training opportunities for his clients. In 1997, along with David Domenici, he started the Maya Angelou Public Charter School, an alternative school for dropouts and youth who had previously been arrested. A decade later, in 2007, Maya Angelou School expanded and agreed to run the school inside D.C.’s juvenile prison. That school, which had long been an abysmal failure, has been transformed under the leadership of the Maya Angelou staff. The court monitor overseeing D.C.’s juvenile system called the turnaround “extraordinary.”

At Yale Law School, where he has taught since 2011, Forman teaches Constitutional Law and a course called “Race, Class, and Punishment.” Last year he took his teaching behind prison walls, offering a seminar called “Inside-Out Prison Exchange: Issues in Criminal Justice,” which brought together, in the same classroom, 10 Yale law students and 10 men incarcerated in a Connecticut prison.

Professor Forman has written many law review articles, in addition to op-eds and essays for The New York Times, The Atlantic, The New Republic, The Nation, and The Washington Post. “Locking Up Our Own” is his first book. He lives in New Haven.

Bill Harmer, executive director, The Westport Library, said, “In celebrating Dr. King’s legacy, we are pleased to collaborate with our community partners for Professor Forman’s candid, thought-provoking discussion of mass incarceration and its consequences on communities of color.”

Forman’s address will be followed by a moderated audience Q&A and a book signing. Books will be available for purchase at the event. In addition, there will be performances by the Serendipity Choir and students from the Regional Center for the Arts. Complimentary refreshments will be served in the Playhouse lobby after the presentation.