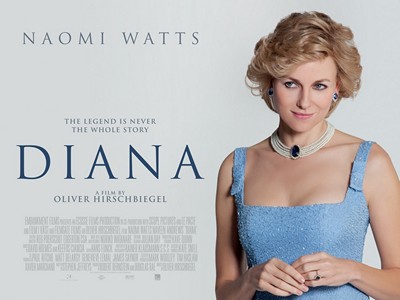 With the birth of His Royal Highness Prince George of Cambridge, the son born to  Catherine Duchess of Cambridge and Prince William, we can't help but be reminded of Princess Diana. I was pregnant when she died. I recall leaving flowers at our town's makeshift memorial and the heavy pall that shrouded the nation. I remember images of Lady Di cradling infants with AIDs and, in her pink oxford, traversing landmine-laced terrain. And, of course, images of her historic wedding to Prince Charles, showcasing her gown's storybook silk train.

Of late, the media has unearthed photos of Di and Charles as new parents, using a split screen next to Wills, Kate, and their swaddled infant. Both mothers wore flowing polka dot dresses, both fathers glimpsed their boys with proud eyes. Superficially, the resemblance is uncanny. Additional reminders of The People’s Princess have emerged as hype surrounding the upcoming film, Diana, which debuts in London on September 5 and later in the US. The most popular woman in the world, Diana remains lost, but never forgotten.

There is much to cherish about Diana, Princess of Wales. Most profound, for me, was her role as mother. Like Diana, I have two boys. And like Diana, I love them with abundant fervor. Princess Diana had a mother's heart, though it gave out at her life's tragic close. I can't imagine my boys motherless, as her young sons became. I can't fathom the aching craters left in their souls after Diana's death. I am still moved by the the clip of Wills and Harry trailing her casket, an indelible window into their grief. And can’t shake the poignant close-up of the note marked "Mummy," nestled within white freesias.

A larger than life do-gooder, Princess Diana was revered by the masses. Despite her popularity, there was a sadness to Lady Di; her hallmark blue eyes elicited pain. They housed pain from a strained marriage and her later publicized battle with bulimia. They housed the pain that can accompany fame.

But Diana beamed with her boys; they were her joy. Though cut short, her motherhood was captured in candids taken on the balcony with pudgy, suspendered toddlers and in that famed log flume shot of Diana and the boys, plastered during coverage of her death. Her affection for them was palpable. Though thrown into a fairy-tale existence, Princess Di was real. She yearned to raise an unassuming brood versus one of entitlement, often worn by those of privilege. She craved normalcy. Diana insisted they wait on lines for movies and amusement park rides and triumphed in those teachable moments. Though royalty, the young Princess tried to rear her boys in a world void of VIP status.

Diana, too, had a beauty that was unmatched. With her svelte figure and cropped blonde locks, she sported tiaras and the day's couture with ease, along with her tentative, half-smile. Wills inherited his mother's gaze, as he's often photographed with his head titled downward, piercing blue eyes glancing up. His chiseled features also harken back to his heritage, Diana's defined face. In addition, mother and son share a shy demeanor, while Harry shows a second child's spunk.

Perhaps Diana's former engagement ring is symbolic -- a constant reminder of love.  Not only a sign of Wills' love for Kate, but Diana's for them, and the world at large. Perhaps it houses a hidden camera from which she keeps watch over her first born and his bride. Perhaps Princess Diana handpicked Kate, a commoner who embodies a kindness and compassion reminiscent of her own. Kate is humble. And like Diana, she has politely bucked royal advisers during her term as Duchess. She grocery shops for herself. The late Diana would have relished that. Bittersweet, the young couples' wedding was marked by Diana's presence. Though invisible, her parental blessing wafted through the church, her name, uttered on every newscast.

Diana would have rejoiced about future King George VII. Indeed, she would have made the best of babysitters. His birth has brought forth hope to the royals, a respite from the harsh scrutiny of their fishbowled lives. He has bonded Kate and Wills with parents across social classes. Their experience, universal at its core, connects us.

Perhaps George's arrival can lift the sorrow that has shadowed much of Wills and Harry's young lives, that his very existence will somehow lesson their loss. Perhaps now, our collective wound can finally heal, that this tiny boy will channel the goodness and humanity that was his Grandmum.