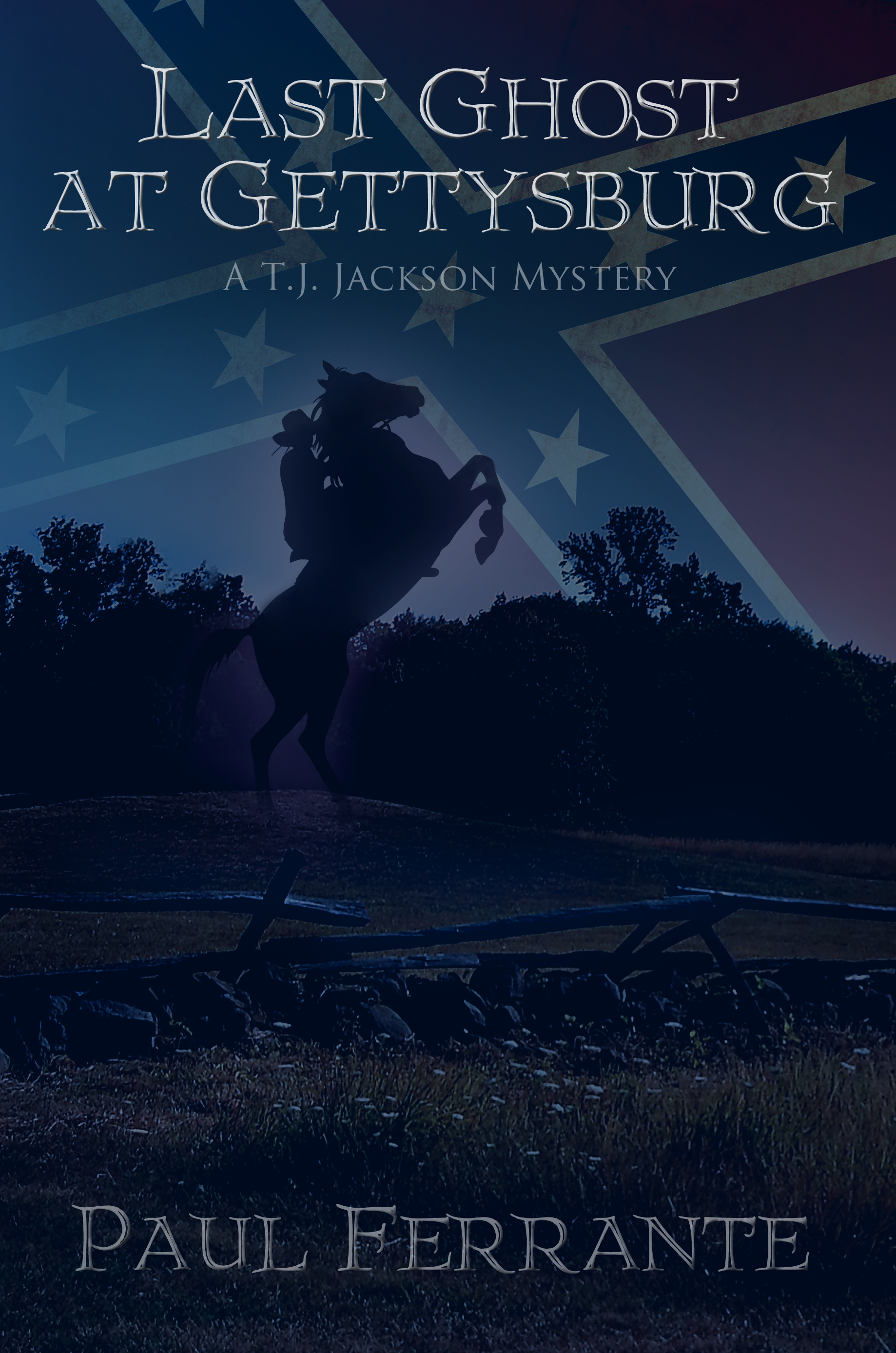 As a father, a teacher, and a one-time football coach, Paul Ferrante consistently preaches perseverance. He’s also a living model of it. The Coleytown Middle School teacher received his share of rejections while shopping around his young adult novel, “Last Ghost at Gettysburg: A T.J. Jackson Mystery.” But he never gave up.

“You can’t tell other people not to quit and then quit yourself,” he noted when we spoke in his Coleytown Middle School classroom. “You have to have a thick skin.”

Ferrante’s novel was published earlier this year, with a sequel due out in September and a third installment underway.

The novel begins with a bang…literally. Partying late into the night in a Gettysburg National Park cemetery, two college kids encounter a Confederate soldier on horseback, in full regalia. “State your business here,” he demands. Dissatisfied with their answer, he brandishes his Colt .44 (standard cavalry issue, we learn), and just like that, the party is over.

Almost 300 miles away in Connecticut, 14-year old T.J. Jackson learns he will be spending the summer with his late mother’s brother Mike, a ranger at Gettysburg National Park, while T.J.’s father spends the summer working in Paris with his girlfriend. From there, the action is non-stop, with history lessons cleverly woven in, as T.J., his beautiful and feisty adopted cousin LouAnne, and his awkward—but with a heart of gold—best friend Bortnicker (who travels down to Pennsylvania to visit) investigate the mysterious murders.

Ferrante credited the idea for the novel to two childhood experiences. “When I was a little kid, I used to watch a television show called The Wild, Wild West with Robert Conrad about two secret service agents during Ulysses S. Grant’s presidency,” he shared. One episode featured a Confederate ghost rider. “I never forgot this image,” Ferrante said. A few years later, his parents took the family on a trip to Gettysburg. “I thought the place was fascinating. As time went on, I started wondering, what if I took the ghost rider and put him here?” he explained.

For inspiration for the three main teen characters, Ferrante didn’t have to look far. They are composites of the thousands of students he has taught over the years, 13 at Coleytown Middle School. T.J. is the popular, athletic kid, though not entirely comfortable with that persona, and has suffered a terrible loss—the death of his mother. Bortnicker is studious but socially awkward, “a kid who is on the outside looking in,” as Ferrante described him. Then, there is LouAnne, smart, attractive, athletic, and a strong character. “It’s very important for girls to see this kind of female,” Ferrante said. “She’s an equal of the boys in every situation, and often the boys defer to her.”

The characters are beautifully drawn, complex and flawed, capable of making mistakes, but who support each other and who, like their creator, persevere in the face of challenges. T.J. stands up to the bullies who pick on Bortnicker, and when Bortnicker inadvertently reveals a secret of T.J.’s to LouAnne, she files it away rather than using it as a weapon. Basically, they’re the kind of kids you hope your kids will gravitate to as they navigate the challenges of growing into adulthood.

Besides the teens, “Last Ghost at Gettysburg” is brimming with colorful characters—a “gonzo ghost hunter” who rolls into town looking for a story to film for his cable paranormal show, the town “expert” on haunted Gettysburg, the investigators on the case. As each investigates the case in his or her own way, the action builds up to a climactic moment on Reenactment Day, when thousands of history junkies descend on Gettysburg to restage the pivotal battles.

A blend of history, mystery, paranormal, and even a little bit of romance, the book has something for everyone, with a skillfully woven plot. Even grown-ups may find themselves reading late into the night to see how the story plays out. This reader certainly did, and “The Killer Angels” by Michael Shaara and “Gone with the Wind” by Margaret Mitchell, both Pulitzer-Prize winning Civil War novels, have been added to the to-be-read list. Also? A trip to Gettysburg never sounded so appealing.

Inspiring readers to study history is exactly what Ferrante hopes to achieve with his historical-paranormal mysteries. That it took several years and a tall stack of rejections to achieve his goal only makes the moment sweeter. “There was no greater thrill than to get that first book in the mail and to see my name on the cover, and to know that I did this,” Ferrante said. “This is the thing I’ve always wanted to do.” His persistence also provides a great lesson for his students, he noted.

For more information about Paul Ferrante, visit his website at paulferranteauthor.com and T.J. Jackson Mysteries on Facebook.